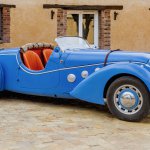 With the Retromobile classic car showcase in Paris being postponed from February to late May, the auction houses that usually showcase some of their most spectacular consignments in the French capital also are making scheduling and formatting changes.

Artcurial Motorcars simply moves its sale to its Paris headquarters. Bonhams has just announced that it will stage its Les Grandes Marques du Monde à Paris auction as “the first fully online timed motor car sale” held by the company.

“Although Bonhams is known for our traditional auctions held with an auctioneer at the rostrum, in a world where public participation is not possible, this is an innovative solution, allowing buyers to bid wherever they are in the world, while still benefitting from the service provided by a traditional auction house,” Paul Darvill, Bonhams European auctions manager, is quoted in the announcement.

“Bonhams will continue to provide the same level of service that our clients expect,” he added. “We will take possession of all the lots consigned and mediate the sale, offering support and advice throughout the process to provide reassurance to our vendors and buyers.”

Bonhams said that cars consigned to the sale will be available for pre-auction viewing at sites in France, Belgium and Italy.

Headlining the auction, which runs from March 3-10, is a 1938 Peugeot 402 Darl’mat Special Sport, which the auction house calls “one of the rarest and most distinctive French motor cars of the pre-war era.”

Darl’mat was a Peugeot dealer who had designer Georges Paulin and coachbuilder Marcel Pourtout built 105 streamlined and aluminum-bodied coupes, cabriolets and roadsters over a 2-year period. The cars were powered by Peugeot’s 2.0-liter engine and could run up to 150 mph.

“One of 53 roadsters produced and now one of only 20 remaining, the example offered has a known history from new, having spent its entire life in France. Recently restored, it is presented in its original livery of blue over tan.”