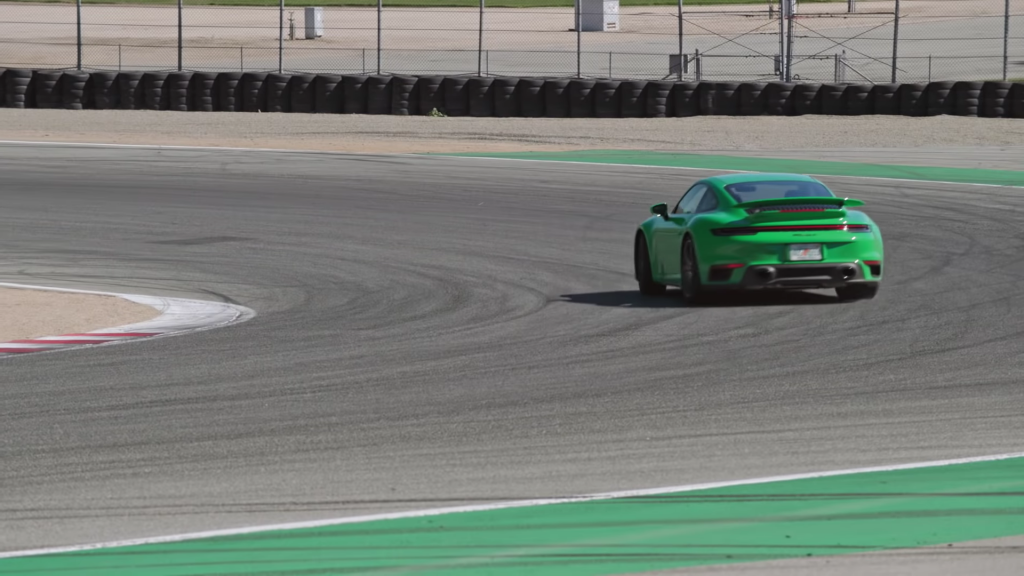 The 911 Turbo might have more a reputation as a comfortable cruiser than a track car, but the latest 992 Turbo S has a few new assets making it a little sharper than the rest. As Randy Pobst takes it by the scruff of its neck and pitches it through Laguna Seca’s corners with noticeable steering correction, this latest iteration of Porsche’s uber-capable cruiser proves it might have more GT car in it than you would believe.

No surprise to anyone reading this, but the Turbo S’ greatest strength may be its ability to turn power into propulsion. As a result, its low-speed acceleration is immense. With 641 horsepower and 590 lb-ft of torque, the latter figure available from 2,500 to 4,500 rpm, driven through all four wheels, nothing is faster leaving the Andretti Hairpin and the slippery Turn 11. You really get the sense from the onboard footage that the front axle is clawing the car out of these bends, and with a revised PTM sending as much as 369 lb-ft to the front wheels, that would make sense.

But power is not what helps this car clock times not far off a well driven 991 GT3 RS. A front track that’s a whopping 42mm wider and a rear track 10mm broader than before both contribute. Additioanlly, as the paint might suggest, this example a little extra going for it with its suspension calibration.

This Turbo S has the new Sport PASM which lowers the car by 10mm and fits additional helper springs to the rear. The active rollbar adjustment minimizes the little roll there is, but the dampers have been tuned specifically to suit this pitch and lean. Just watch how this 3,650-pound GT, supposedly just on this side of unwieldy, bends into Turn 2 with real alacrity. No portly Porker here—instead, as Pobst points out, there’s a lot of GT3 in this car.