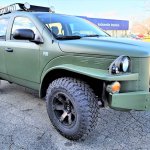 Retro styling is nothing new, yet here’s a long look back that should turn heads in wonderment, and it’s something that we’ve never seen done before: a modern Dodge Durango transformed into a striking facsimile of a WWII military truck.

The Pick of the Day, ostensibly a 2006 Dodge Durango Hemi SLT 4X4, is described as a “one-of-a-kind off-road and adventure vehicle” by the Troy, Michigan, dealer advertising the SUV on ClassicCars.com.

“This aggressive-looking 4-wheel drive is ‘Our version of a (Dodge) WC53 Carryall based on a late-model Dodge Durango’,” the ad says, quoting the builder of the unique custom truck, Advanced Automotive Technologies.

“They started with a Hemi SLT version of the Durango Adventurer with very low mileage (the current mileage is only 54,600),” the seller adds.

Aside from its expressive bodywork, the Durango pretty much stayed the way it left the factory, with its up-to-date interior and powered by a 5.7-liter Hemi V8 rated at 335 horsepower and 370 pound-feet of torque, making the SUV capable of towing nearly 9,000 pounds.

The Durango’s resemblance to the legendary Dodge WC53 is unmistakable, the front end formed into the flat-fendered, separate-headlight style of the utilitarian original.  Keeping with the theme, the Durango is painted in U.S. Military Olive Drab.

“One of the most-iconic US military vehicles other than the Jeep was Dodge ¾-ton WC series trucks designated ‘Weapons Carrier.’ They were built in several series as a truck, command car, ambulance and personnel carryall,” the seller says in the ad. “These vehicles are popular with collectors, but for daily use they are not practical with outmoded suspension and powertrain.

“This vehicle offers the upgraded look of the original but having modern suspension, Hemi power and all the amenities of a modern vehicle. Effectively, the best of both worlds!”

Among the Durango adventure truck’s features are Falken WildPeak M/T tires (LT285/70R17) on Fuel “Beast” Alloy Wheels; a BadLand ZXR 12,000-pound winch mounted on the front and a 3,500-pound BadLand ATV utility winch on the rear; and a roof-rack carrier basket with auxiliary off-road lighting.

The custom SUV took about 1,400 hours to build, the seller says, so the asking price of $39,999 seems totally reasonable for a daily-drivable, off-road-capable Durango that will have everybody who sees it doing double takes.

The post Pick of the Day: 2006 Dodge Durango restyled as a WWII military truck appeared first on ClassicCars.com Journal.