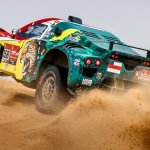 As the Dakar Rally 2021 heads toward its finish on January 15, officials from the Amaury Sport Organization that stages the event have announced plans for the rally’s future, including a reduction in emissions, both during the race and at overnight bivouacs.

“By 2026, all the vehicles driven by Elite competitors in the car and truck categories of the Dakar will be subject to new ultra-low emission standards,” the organizers’ statement said. The statement also said that plans are in place to make the overnight campsite 100 percent powered by renewable energy sources.

“Since its inception in 1979, the Dakar has never shied away from exploring uncharted territories, from the deserts of Africa to the vast landscapes of South America and the arid expanses of the Middle East,” the organizers noted. “The Dakar has continued to innovate without sacrificing its sense of adventure, passion for exploration and determination to push the limits.

“The Dakar is now demonstrating its pioneering spirit with a pledge to start building the future of rally raid without delay,” a future “fostering green innovation in the world of rally raids.”

“The Dakar is determined to fully exploit its role as an open-air lab to stimulate, test and validate the technical advances made by the constructors in the knowledge that the race vehicles of today are the production vehicles of tomorrow.”

Beginning in 2022, an “alternative energy” class will be added for hybrid, electric or hydrogen-powered cars and trucks and for those “who implement other emission-slashing technologies.”

By 2026, “all elite competitors in the car and truck categories of the Dakar will be required to enter the race with vehicles that meet new ultra-low emission standards.”

In the meantime, the Dakar Rally 2021 races to the finish line.