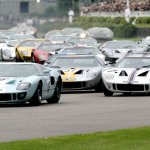 In late November 2020, we shared the news that Britain’s Motor Racing Legends was planning a one-make racing series for historic Ford GT40s with two races set for 2021, one in May at Donington and the other in October at Silverstone.

“Would you risk your historic GT40 in a 2-race series?” we asked.

Well, as it turns out, you don’t have to possess one of those historic and original Ford GT40s to compete in the new series.

“The memorable 2013 GT40 race at Goodwood was won by F1 designer Adrian Newey’s 1965 original example, chassis P/1010,” Le Mans Coupes said in a news release, “but many slots among the 27-strong grid were filled by Superformance FIA-compliant evocations – genuine ‘continuation’ cars built to 1965 specification, whose parts are therefore 100 percent interchangeable with those of the original cars.”

Turns out such cars as Superformance’s brand-new but old-spec cars are welcome in the 80-minute “Amon Cup” races scheduled for 2021.

“It is great that so many owners of original GT40s are still prepared to race them, despite their ever-increasing value,” Oliver Hulme, sales director of Le Mans Coupes Ltd., UK importer of Superformance vehicles is quoted in the news release. “However, for those not unwilling to risk their cars, or competitors without such a steed at all, the optimum answer lies in factory-built Superformance evocations.

“As the only continuation cars approved by the Shelby American World Registry, they are alone in being allocated GT40P/2000 Series chassis numbers, and are visually indistinguishable from the originals.

“Moreover, as prices start from just £118,700 ($160,500) for the rolling chassis option typically required by most race teams, they are affordable to an infinitely broader range of competitors.”

Or, he added, Le Mans Coupes will sell you a race-ready turnkey car.

Le Mans Coupes added, “All the automotive stars of the hit movie Le Mans ’66 (Ford v Ferrari in the US) were exact evocations of the originals, manufactured and supplied by Superformance. Enthusiasts may also have witnessed the brand participating and even winning at such iconic events as the Spa 6 Hours, Silverstone Classic, Le Mans Classic, the aforementioned Goodwood and other prestigious international historic races.”