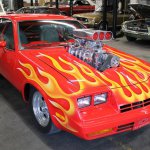 The most popular Monza from Chevrolet was the sporty and especially the turbocharged version of the rear-engine Corvair, described by The Standard Catalog of American Cars as “the true star of the Corvair lineup, as Chevrolet’s rear-engine wonder caught on with the sports car crowd” in the early 1960s.

But there was another Chevrolet Monza that also was popular with the sports car crowd, and especially with those who modified their Chevys for sports car racing. For the 1974 model year, Chevrolet resurrected the Monza, but now as a front-engine, rear-driven compact coupe.

However, you had to go through the hood to mount a supercharger!

As exemplified by the Pick of the Day, sports car racers weren’t the only folks who saw potential in this new package. The Pick of the Day is a 1977 Chevrolet Monza Spider that has undergone Pro-Street modifications that make it ready for your favorite drag strip.

However, notes the Pittsburgh, Pennsylvania, dealer advertising the car, “This is a versatile car.  You can show it.  You can race it.  You can drive it around on the street.  It’s easy to drive and enjoy!”

“The best way to describe this car is the perfect mix of high-quality work, lots of time and a lot of money invested,” the dealer contends. “That is what went into this higher end build.  No short cuts, cheap parts or quick tricks.  Everything is custom and high end.  The car is built to enjoy safely on the street but race if wanted.”

The exterior is done in red and flames — and with spiders, a nod toward the new-for-’77 Monza Spyder appearance and performance upgrades that included revised suspension and radial tires. The interior, in gray and red and protected by a roll cage, is customized from headliner to carpet to dashboard gauge array.

While you could get your mid-’70s Monza from a Chevy dealership with a small-block V8, this one has a supercharged 496cid big-block built by Domhoff Automotive Machine and is rated, the dealer reports, at more than 2,000 horsepower. However, as currently tuned, with only 2 pounds of boost, the engine pumps out “a street friendly” 600 horsepower.

“The approach to this build was pillared upon safety, quality, durability and reliability,” the dealer reports “This car runs like a race car, is tame enough for the street, shifts great, stops and steers as it should!  Tires, brakes and fluids are all new/fresh.  A true “race car thats a street car!”

The post Pick of the Day: Chevrolet’s other Monza appeared first on ClassicCars.com Journal.