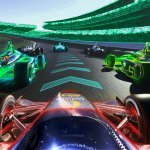 The famed Borg-Warner Trophy features the images of every driver who has won the Indianapolis 500-mile auto race. But a new race is scheduled for October 2021 at the Indianapolis Motor Speedway featuring cars without drivers, at least without a human driver sitting in the cockpit.

The inaugural Indy Autonomous Challenge, which unveiled its Dallara IL-15 racing car January 11 on the opening day of CES (formerly known as the Consumer Electronic Show), will offer $1.5 million in prizes to teams from colleges and universities around the world racing cars using student-created software that enables autonomous racing.

Think DARPA Grand Challenge for motorsports, with a goal of developing software that “can ensure precision control of vehicles at high speeds during the competition and reduce fatalities and pollution on public roadways afterwards.”

“If we can go- 240 mph and keep cars from colliding on the track, surely we can make highways safer,” said Mark Miles, president of Penske Entertainment, which owns the Indy track and the Indy Car racing series.

Speedway president Doug Boles noted that the Brickyard originally was constructed as a site for technology testing and development, and that the Wright Brothers set an aircraft altitude record at the facility in 1910, a year before the first 500-mile auto racing.

“Our history has led us to today and to the IAC,” he added. “We can’t wait to see the best and brightest minds from around the world competing at the Indianapolis Motor Speedway.”

Those minds will come from nearly 40 colleges and universities from 14 states and 11 nations, said Paul Mitchell, president of Energy Systems Network, the Speedway’s partner in the project.

He said he expects the software development for the race to “accelerate technology commercialization and to solve real-world (public transportation system) programs.”

“Self-driving cars are the next challenge in automotive technology and a major leap needed to be taken,” he added. “What better way than a high-speed race at the world’s best race track?”

Software simulation racing is scheduled for late May with practice days for the race cars at the Speedway in early June and early September. Pre-race practice starts October 19 with the final 20-lap race on October 23. All teams retain the rights to their software and the winning team gets a $1 million prize.

The post Driverless cars will race at Indy appeared first on ClassicCars.com Journal.