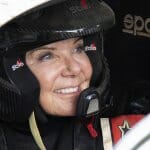 “If we want to look to the future of car collecting, we should look at women. As companions, of course, but above all behind the wheel, proud and happy to show their talent.”

That from the introduction to the chapter in The Classic Car Trust’s The Key annual for 2020.

That intro is followed by stories about collector Anne Brockinton Lee; “judge, driver, journalist and wine expert” Cici Muldoon; and vintage racer Katarina Kyvalova; and by the results of two surveys, the first of women attending car events and Europe and the United States and the second of more than 1,000 women drivers in the US, England, Germany France, Italy and Switzerland.

It might also have featured Renee Brinkerhoff, who at the age of 57 and her children raised, entered the La Carrera Panamericana rally in 2013, won her class and since then has set a goal of driving her 1956 Porsche 356A on every continent and raising money for charities in the process (only Antartica remains, and she’s headed there post coronavirus pandemic)

In 2019, The Key published a survey based on questions for car enthusiasts yet to reach their 30th birthday.

Most popular by far with those attending car events are “non-competitive” events, in other words, shows rather than races. More than 90 percent not only attend with a partner, friends or their own sons, but also say they are motivated to attend by the opportunity to meet people with the same passion for cars.

Asked if they’d favor women-only car events, little more than 25 percent responded favorably, and that figure dropped to only 17 percent of what were described as “young women.” On the other hand, 31 percent overall and 44 percent of younger respondents said they preferred men and women in equal roles at car events.

“Women want cars,” the editors report. “They want to be behind the wheel, to be part of the action, to enjoy the pleasure of a classic car.”

And not just a classic vehicle. In the survey of 1,100 women drivers, while most said a car was a necessity or at least a must-have convenience, 62 percent they liked to drive, and 35 percent said a car brought pleasure or was a source for fun. Only 8 percent said they got no enjoyment from cars.

Questioned about collector car ownership, they said classic cars require a lot of money, but also can be a good investment, and more than half said they found classic cars fascinating.

In summarizing the findings of the surveys, the editors report:

“We can now say with absolute certainty that women represent an extraordinarily vibrant energy which, if properly understood and appreciated, could go a long way toward strengthening the positive attitude regarding the universe of the automobile and its history.”