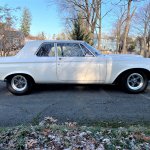 If you’ve been keeping up with the cars being put up for auction on AutoHunter, driven by ClassicCars.com, you probably didn’t miss this classic ’63 Plymouth racer. Finished in white over a bright red interior, it’s powered by a 505cid V8 paired with a 6-speed manual transmission.

According to the seller, the previous owner put the car through a rotisserie restoration that included a professional repaint and installation of a new engine. Additionally added to the exterior were new-condition bumpers, quad headlamps, and a functional hood scoop. The trim was replaced, including the window trim and both headlight and taillight bezels.

The red interior also was replaced, including a new headliner and hardware for the door handles and window cranks.

The gauges are mounted in a custom-made panel. The odometer reads 42,000 miles, of which the seller has added around 300 during two years of ownership.

Under the hood sits the new 505cid V8 engine, which replaced a 440cid, and features a factory-correct cross-ram intake with Mancini dual carburetors and linkage as well as an Eagle stroker crank kit and JE pistons. It’s equipped with 915 casting heads from 1967 that utilize a mechanical roller setup from Comp Cams, giving it a 10.1 compression ratio capable of running on pump gas. You’ll also find performance Doug Thorley 2-inch coated headers and a custom 3-inch exhaust welded with cutouts.

Visit this vehicle’s AutoHunter listing to find further information and a gallery of photos.