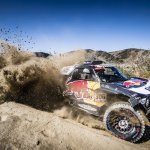 The 2021 Dakar Rally launched January 3 from Jeddah, Saudi Arabia. By the finish, January 15 at the same location, the 498 competitors — in 75 cars, 42 trucks and on 110 motorcycles and quads — will have covered nearly 5,000 miles in their circular “tour” of the Arabian Peninsula.

Formerly known as the Paris to Dakar Rally, the off-road even dates to 1977 when Thierry Sabine got lost while riding his motorcycle in the Libyan desert during the Abidjan-Nice Rally. He found his way out of the dunes, but returned to France captivated by the Saharan environment and in 1979 launched the Paris-Dakar Rally that started in Europe and ended in West Africa.

Terrorism forced the cancelation of the 2008 event and a subsequent move to South America for several years. It moved to the Middle East in 2020.

This year, the entire route is in Saudi Arabia. By the fourth day, 13-time Dakar Rally winner Stephane Peterhansel was the leader yet again but was involved in a tense duel with Nasser Al Attyah.

“We’re not marking one another,” Peterhansel said. “It’s just one relentless attack after another, and in the end we finished in the same time!

“Apart from a small navigation error near the finish, I don’t think I can push much harder. To stay in contention, we need to go all out. So far, so good, as we aren’t making too many mistakes.

“In the old times, five percent of all contenders would be knocked out of the race by driving mistakes or technical issues, but it’s become far less common, so you just have to hold on.”

While the competitors are so focused on the route that they may not have time to appreciate the scenery, you can take your time wandering through this gallery of images from the rally’s early days.