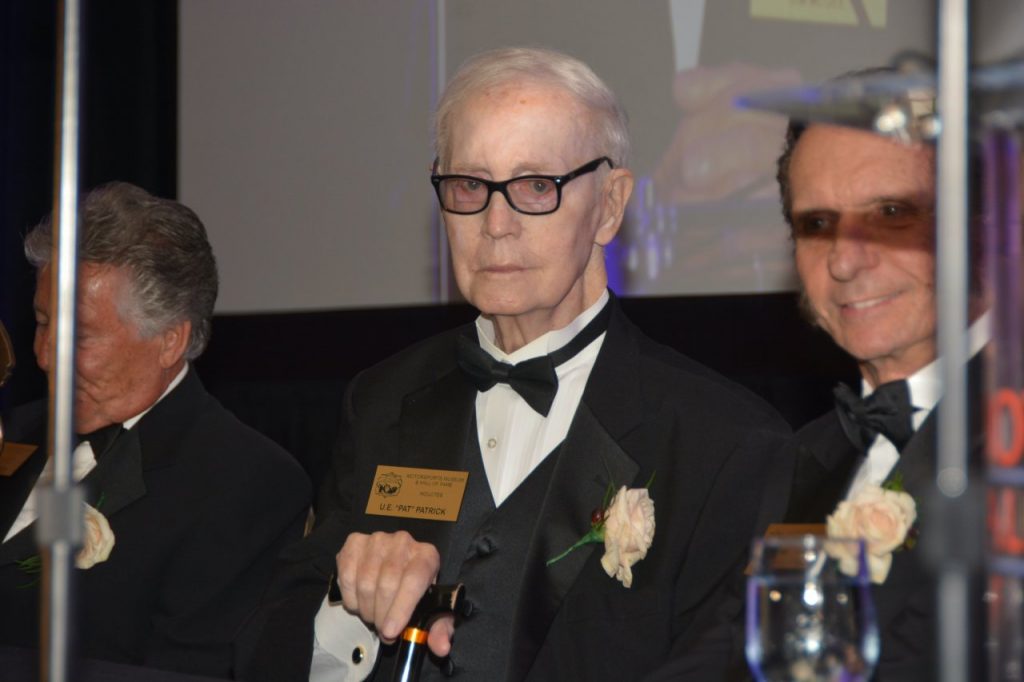 Editor’s note: U.E. “Pat” Patrick, three-time Indy 500-winning car owner and co-founder with Roger Penske of Championship Auto Racing Teams, died this week in Phoenix at the age of 91. The following is an update of an article we published in 2018 when Patrick was inducted into the Motorsports Hall of Fame of America.

The telephone rang at my desk in the newsroom. The voice at the other end of the line (yes, this was back in the days when telephones were connected by wires) asked if I was attending the news conference the next day.

What news conference, I responded?

After a couple of expletives (fortunately, none of them directed at me), the voice explained that Championship Auto Racing Teams was making a major announcement the following day at the Tavern on the Green in New York City’s Central Park and that as a sports editor of the daily newspaper that covered a lot of auto racing, I needed to be there. They then asked if I could be at our local airport a couple of hours before the press conference.

The voice belonged to Ueal Eugene “Pat” Patrick, who had grown up dirt poor and working in onion fields in southern Michigan. After high school, he entered the Air Force because the G.I. Bill would make it possible to go to college. After he graduated from Michigan State University, he sold oil-field exploration equipment. It wasn’t too long before he decided to try his hand at that game and he drilled, and drilled, and drilled some more, 18 dry holes in a row.

But Pat Patrick was nothing if not determined, and he finally drilled a well that tapped into a reservoir of black gold — and then he did it again and again until Patrick Petroleum was listed on the New York Stock Exchange.

At some point, one of his sons wanted to race sports cars and the doctor who did the medical screening needed as part of the racing driver’s license process discovered cancer, which was caught early enough to be cured. Pat felt indebted to motorsports for saving his son’s life and he got involved, and in a very big way, a way that in 2018 put him where he’d deserved to be for a very long time, in the Motorsports Hall of Fame of America.

In the late 1960s, Patrick became a sponsor, and soon co-owner and quite quickly sole owner of a racing team that celebrated in Victory Lane at Indianapolis in 1973 and 1982 with Gordon Johncock and in 1989 with Emerson Fittipaldi. Many of us still think Johncock’s ’82 victory in a last-laps duel with Rick Mears in one of Roger Penske’s car was the greatest finish in Indy 500 history.

But there was heartbreak as well as winner’s-circle happiness for Patrick. In 1973, one of his drivers, Swede Savage, was killed in a crash at the Speedway and a young pit crew member, Armando Teran, died when struck by an emergency vehicle speeding in the wrong direction down pit road.

I’m sure Pat was generous to their families. I know that one year, a driver who was not even part of his team died in a crash at Indy, and very, very quietly, Pat paid off the driver’s mortgage so his family wouldn’t lose its house as well as its husband and father. I also know Pat would be furious with me to know I’ve shared this information, but it speaks of who he was.

He also was someone who wanted to do things his own way. Johncock’s 1982 victory was achieved in a car built by Patrick’s own team. Such cars were called Wildcats, after Patrick’s wildcatting oil business.

Later, seeing a need for a way young drivers could get ready for Indy cars, he personally underwrote the Indy Lights series and the development of its cars.

Among the car owners unhappy with the way things were being done at Indianapolis, Patrick joined Penske as the driving force behind the rebellious Championship Auto Racing Teams series. This effort elevated Indy-type racing to international sports status that threatened Formula One for global supremacy in motorsports.

As the newspaper’s sports editor in the Midwestern town where Patrick chose to live just a few miles from those onion fields of his youth, I covered his racing team at Indy, at Michigan International Speedway, and sometimes at other tracks. I also got to know him as a humble person who, when he wasn’t at a race, usually could be found on Saturday mornings having a quiet breakfast at the local airport coffee shop.

The kid from the country had become a multi-millionaire, but he’d remained firmly rooted.

The day after that telephone call to the newsroom, I met Patrick at his hangar at the Jackson, Michigan, airport and we rode his Lear Jet to New Jersey. A car was waiting for us on the tarmac, even though we easily could have walked across that runway to the helicopter idling nearby.

As we climbed into the helicopter, Roger Penske greeted us, mentioned that it was a gorgeous day, and asked his pilot to do a sightseeing lap around Manhattan before we landed at a heliport on the East River.

After landing, Patrick, Penske and I climbed into a cab for the ride through Central Park. But when we reached the Tavern on the Green, Penske immediately disappeared, leaving Pat and me to fend for ourselves. Small-town guys in the big city, we turned the wrong way and had to circle all the way around the restaurant, no doubt presenting quite a spectacle to people eating on the other side of the big glass windows as we were climbing over bushes in our search for the front door.

Finally, we found it. As we straightened our ties to look presentable before entering the exclusive dining establishment, Pat offered a laugh and an observation: