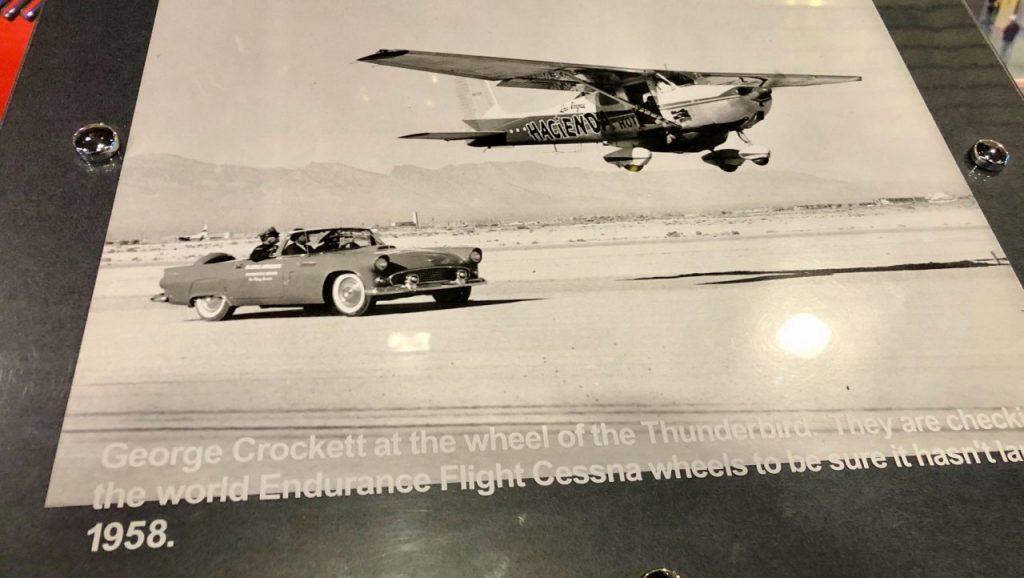 If you’ve landed at McCarran International Airport on a visit to Las Vegas, you might have noticed the small, single-engine airplane hanging from the roof above the baggage claim area. But you may not have seen that aircraft’s companion vehicle, a 1956 Ford Thunderbird, which is parked not far away on the second-floor mezzanine.

A vintage airplane displayed at the airport makes sense, but what about the T’bird. Why is it there?

Before it was a major international airport, McCarran was a smaller operation for a much smaller Las Vegas, an airstrip founded as Alamo Airport in 1941 by George Crockett for his Alamo Airways.

Crockett sold the airport to Clark County after World War II, but continued to use it as the base for his airline, which from 1957 until 1968 used a red Thunderbird, equipped with spotlights, emergency radio and fire-fighting equipment, as a lead car/crash wagon.

“Lighter and more agile than the fire truck, the Thunderbird could thus get to crashes quicker and gain control of the emergency before the truck could arrive,” according to a report on hemmings.com.

In November 1979, the Alamo Thunderbird was credited with helping save the lives of 44 passengers and the crew of a charter aircraft that was flying out of Las Vegas, but suffered engine failure and crashed a mile past the end of Runway 3.

The T’bird chased out into the then-desert after the airplane, its emergency equipment used to extinguish a fire being fed by aircraft fuel. The passengers were able to flee the aircraft even before fire trucks arrived on the scene.

The Thunderbird also had played a role in a publicity stunt in December 1958, when the owner of the Hacienda casino and resort started offering flights from Los Angeles to Las Vegas; for $27.50 you flew in, spent the night, got a bottle of champagne and $5 in casino chips.

To help publicize the flights, accomplished by pilots Robert Timm and John Cook, a Hacienda Cessna 172 set out to establish a non-stop flying record, which it did — 64 days, 22 hours, 19 minutes, 5 seconds.

The plane was equipped with extra fuel tanks so it only needed to be refueled twice a day, which was accomplished by flying 20 feet above a desert road and lowering a fuel line to a moving fuel truck. At the same time, Alamo’s Thunderbird was driven beneath the airplane, sending extra 5-gallon fuel tanks up a rope.

The occupants of the car also were close enough to inspect the Cessna’s tires to make sure they were still clean, thus verifying that the plane had, indeed, remained airborne.

That aircraft is the one hanging above the baggage claim at McCarran.

Meanwhile, the Thunderbird was acquired by Howard Hughes when he bought Alamo Airlines in 1968 and years later was restored and sold at a Barrett-Jackson auction. The car displayed at the airport is a reproduction of the original and was donated to the airport by George Crockett’s widow, Peg Crockett.

The post Why is there a vintage Thunderbird on the second floor of McCarran airport? appeared first on ClassicCars.com Journal.