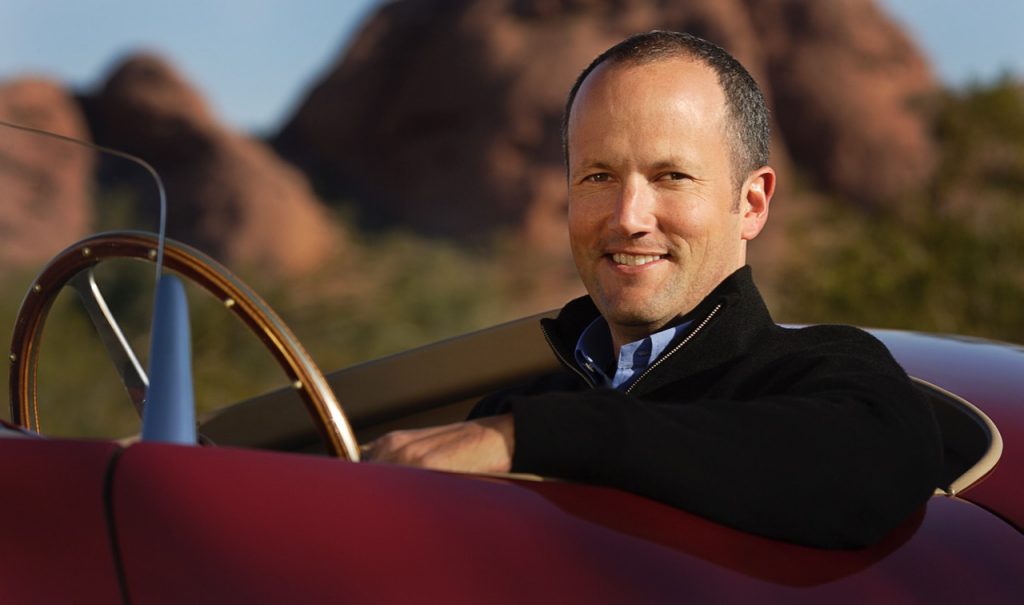 McKeel Hagerty remembers attending a conferencein 2017 and looking — and looking literally, with 1,800 people wearing virtual-reality glasses— to the future with a keynote speaker talking about how his technology was helping to create autonomous cities that would be free of traffic congestion, and free of privately owned vehicles.

When Hagerty introduced himself to the speaker, the speaker asked what he did for a living.

“When I told him, he said, ‘I’m putting you out of business’,” Hagerty recalls.

That brief exchange left Hagerty wondering about the future and thinking about how the collector car experience is not about sitting in traffic but hands-on-the-wheel freedom and driving on great roads, and gathering with friends and tinkering in the garage.

“I just turned 53 last week,” Hagerty said. “A lot who made this car world are 20 to 30 years older and expressing interest to retire. I’m part of a bridge generation… I have a lot of peers doing great things…”

And Hagerty has realized is that his generation, indeed, he himself, that needs to “take the best of what was created and to evolve it for the next generations.”

Each autumn for the past decade, British-based Octane magazine and a panel of car collectors and other subject specialists from around the globe present the Historic Motoring Awards, honoring people, events and organizations for their work on behalf of the hobby.

Also honored was  McKeel Hagerty, chief executive of the insurance, valuation and lifestyle company that bears his family name, as “Classic Car Ambassador of the Year.”

That award certainly seems fitting for a year in which Hagerty not only continued its corporate growth but seemingly went out of its way to provide help during the coronavirus pandemic.

As the pandemic spread and small businesses dependent on collectible and enthusiast vehicles suffered, Hagerty launched its own stimulus program, offering such businesses grants from $5,000 to $10,000. The effort pumped $500,000 into the small-business automotive economy and helped keep several businesses in business.

This fall, before putting their collector cars away for the winter, Hagerty organized a followup event, a series of local driving tours that visited small shops in various areas to check in on how they are doing.

Back in the early spring, when car shows and concours were being canceled en masse, one of our editors, Andy Reid, and Belgian-based photographer Dirk de Jager launched the Isolation Island Concours d’Elegance. Instead of real cars, this series of concours was for scale-model car collectors and it became a global hit on Facebook — and runner-up for one of the Historic Motoring Awards. Lending status to the series was its chief judge, McKeel Hagerty.

Meanwhile, and despite the spreading virus, Hagerty was growing his family-owned business, which started in 1956 when McKeel’s father, Frank Hagerty, started a small independent insurance agency in northern Michigan.

Like many of that agency’s clients, Frank and Louise Hagerty owned vintage wooden boats, and they couldn’t find proper insurance for such watercraft. So, in 1981, they started their own company to insurance vintage boats and cars. The business grew quickly, to the point that his parents called McKeel home from his studies at seminary to help out.

Under McKeel’s leadership, Hagerty has become North America’s leading specialist vehicle valuation tracker and collector car insurer (employing more than 1,300 people and insuring nearly 2 million vehicles). He helped create the Historic Vehicle Association and other non-profits, has launched the Hagerty Drivers Club (now with more than 600,000 members here and abroad), has sponsored seemingly thousands of car shows and concours at all levels in multiple countries, and has launched a media company that includes its own car magazine, other publications and online television programming.

It has expanded into a rent-a-classic program and vehicle storage facilities that also serve as car clubhouses, and it has acquired a major concours and a vintage rally, in part to get first-hand experience at operating such events with an eye on making them more appealing to a younger generation of car enthusiasts.

“We’ve grown a lot in the last decade and exceptionally in the last three to five years,” McKeel Hagerty said. “We’re in the US and have a large position in the insurance space, also in Canada and for 15 years in the UK.”

With the recent announcement of new presidents for Hagerty’s Global Markets and Automotive Business units, the company is expanding on the European continent as well.

But insurance is only part of the business.

“Our strategy is membership,” Hagerty said, noting the media division that has emerged from its vehicle-valuation guides under the banner of the Hagerty Drivers Club, which is open to people who don’t necessarily have vintage vehicles to insure.

“It’s about media… no one wants to read about insurance. It’s about (car) events and experiences,” he explained.

What’s its really about is growing the hobby and making it more appealing for younger generations.

Thus Hagerty’s acquisition of the Greenwich concours and the California Mille and of other events and programs yet to come, so he and his company can learn how to make them even more appealing.

And, yes, he has a business interest, but beyond that he has a personal interest dating back to when he was 13 years old and with his father restored McKeel’s first car, a 1967 Porsche 911 S, and to teaching his own daughters to drive, and to enjoy the roads.

“I do feel really passionate about it,” he said. “This is my life’s work.”

The post Rear view: No. 5 – Hagerty expands its business, and the collector car hobby appeared first on ClassicCars.com Journal.