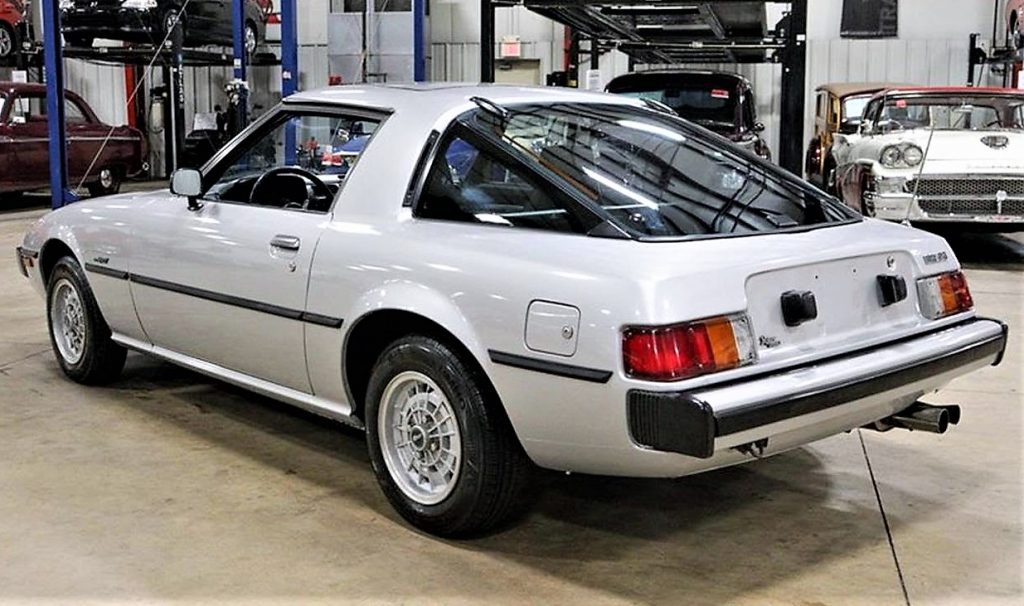 During the 1970s, the world of affordable sports cars was under siege by Japan. It started with the introduction of the Datsun 240Z in 1970 and caught the Europeans off guard in such a way that it took them years to even begin catching up.

It did not stop with the Datsun 240Z as in 1979, the rotary-engine Mazda RX-7 was introduced and was again a game-changing car focused not just at the affordable sports cars from Brittan and Italy, but especially at the Germans.

The first RX-7 took Porsche’s entry-level 924 head on and did everything it did but better and with greater performance. This was proved not only in magazine road tests but also on track where in the Mazda’s 1979 debut at the Daytona 24 Hour race, it would finish first in the GTU class and 5th overall with a second RX-7 finishing right behind it. This was the start of a revolution as the RX-7 would go on to become the winningest cars in the history of IMSA.

The Pick of the Day is one of the debut cars, a 1979 Mazda RX-7 finished in Concord Silver Metallic paint with rare black vinyl seats with black-and-white plaid cloth inserts.

The Kentwood, Michigan, dealer offering this RX-7 on ClassicCars.com says it has records for this Mazda showing that the original owner was an employee of Mazda Great Lakes and owned it until 2018.

Within the past year, the Mazda has been given new tires, new brakes, new battery, new alternator, voltage regulator, new exhaust system, and a complete carburetor overhaul and tune up. The dealer describes the car’s interior as like new and say that the car shows well overall.

I noticed in the pictures a tape repair on the original driver’s seat bolster, but this could be corrected by a good interior repair technician. Options on this car include a sunroof, AM/FM/cassette player, alloy wheels, AC, rear defrost and cruise control. The Mazda includes all the documentation that it was delivered with, books, drivers log, dealer invoice, as well as the original tool kit, the seller says.

When compared with similar Datsun Z cars, the RX-7 is an absolute bargain, with the cars routinely selling for less than $20,000. This represents a huge deal as the best 280ZX cars, the cheapest of the classic Zs, are selling for considerably more.

This Mazda with 91,500 miles offered for $11,900, and it is a shoe in as a future classic sports car and an important part of sports car history.

The post Pick of the Day: 1979 Mazda RX-7, the trend-setting model that won races appeared first on ClassicCars.com Journal.