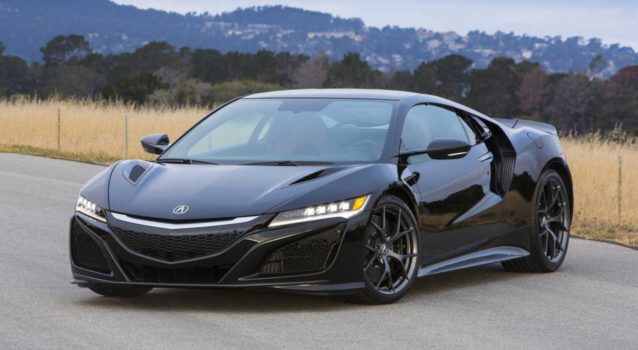 One of the most appealing aspects of every mid-engine Japanese supercar is the Acura NSX price. Every example of the Acura NSX for sale represents a triumph of engineering and style. With the arrival of the 2nd generation NSX, values for pristine originals have multiplied by an order of magnitude.

A well-equipped Acura NSX MSRP will hover around $157, 700. For that, you will receive a twin-turbo 3.5-liter V6 with a potent hybrid drive. An electric motor/generator on the transmission and on each front wheel offers efficient All Wheel Drive at a competitive price.

Nearly a decade in the making, the Acura NSX is the pride and joy of Honda’s Performance Manufacturing Center in Marysville, Ohio. It was inspired by the Acura Advanced Sports Car Concept to be a daily-driven supercar. As such, the static suspension, cargo room, and practicality set it apart from competitors.

Although it packs the latest technology, Acura engineers decided to use high-strength steel to form a light space frame. Cast and extruded aluminum nodes are used to connect the subframes and suspension parts to offer strength and low unsprung weight. The windshield pillars are thinner and stronger than other exotics, and the door sills are more conventional. Complex body lines dictate the use of hydroformed aluminum, sheet-molded composite, and high-temperature plastics to make up the exterior.

We have been teased long enough, and now the new NSX appears to be ready for launch. As the official Pace Car of the 2015 Pike’s Peak Hill Climb, Acura’s latest supercar used twin turbos and three electric motors to scorch the treacherous trail. This new production model of the NSX is powered by a twin-turbocharged V6 engine mated to a nine-speed dual-clutch transmission. The NSX also receives power from an all-new, three electric motor Sport Hybrid (SH) system. The front wheels receive power or braking from two electric motors while the third is inside the rear-mounted transmission.

Driving the Acura NSX is rewarding thanks to the smooth addition of electric torque. Constantly balanced between the front and rear wheels, you will not reach the limits of grip on public roads. Perhaps the main detriment to the car’s performance is a curb weight of 4,800 lbs. No amount of electronic wizardry can mask such a hefty design. 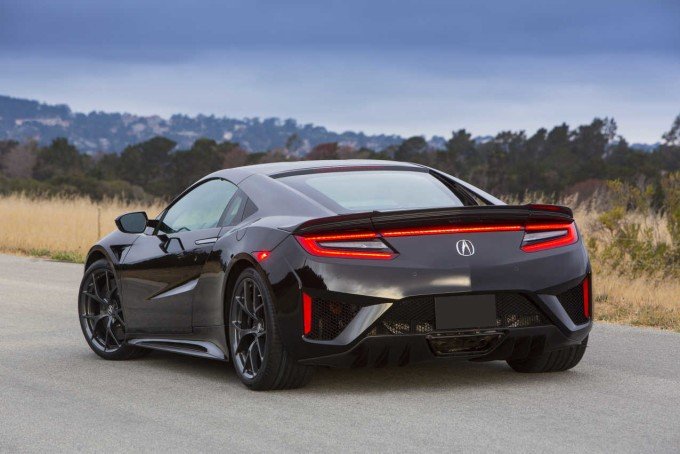 “…the NSX represents the culmination of countless engineering efforts and years of development.”

“Our commitment was to create an all-new NSX that is true to the heritage of NSX—a supercar that delivers a new driving experience, one where every part of the vehicle is respectful of the smartest part of the car, the driver,” said Mike Accavitti, senior vice president and general manager of the Acura division, in a press release introducing the car. The new 2016 NSX is comprised of multiple materials, including aluminum, carbon fiber and ultra-high strength steel.

Sharing almost no components with Acura’s other production models, the NSX represents the culmination of countless engineering efforts and years of development. Being the halo car for one of the largest automakers is a tall order to fill. So in order to ensure quality, a dedicated production line at Honda’s Marysville, Ohio plant is ready to roll.

Staying true to form, the new NSX will arrive with a mid-mounted V6 in a lightweight body, but that is where the similarities between old and new end. This new 3.5-liter V6 uses two turbochargers to make 500 horsepower and 406 lb-ft of torque. A new nine-speed dual-clutch automatic transmission is paired with a direct-drive hybrid motor/generator. Power is stored in a lithium-ion battery mounted low in the chassis. This energy is channeled to the front wheels by a Twin Motor Unit (TMU). Powering each front wheel independently, it can induce yaw while cornering to provide incredible lateral grip. In addition to more traction, Acura added 73 horsepower to the acceleration equation. This will make for blistering acceleration and an estimated top speed of 191 mph. The chassis and space frame are mostly aluminum, with high strength steel used in critical safety areas. Production is about to begin at Honda’s Performance Manufacturing Center in Marysville, Ohio.

For a truly unique car they decided on an all-new powerplant. Drawing from years of dominance on the track, the cylinder heads are separated by 75 degrees. Each cylinder has port and direct injection, with oiling from a dry sump. Thanks to active valve timing and electric wastegates, maximum torque of 406 lb-ft arrives at only 2,000 rpm. When combined with the additional battery power, the Acura NSX is a blast in any situation.

Beating everyone to the punch, the Acura NSX transmission was the first supercar to offer 9 speeds and a dual-clutch input. Cars with this much torque don’t need so many gears, but the deep overdrives offer leisurely cruising on the highway. The electric motor is sandwiched between the clutch plates and the transmission, with three-phase windings surrounding the flywheel. This compact arrangement can add power when needed or instantly store extra power in the battery.

Like all great hybrids, the Acura NSX brakes are based on energy storage. Before the hydraulic system is needed, all three electric motors place the maximum load on the axles. Even if the battery is charged, the voltage is dissipated as heat. Effectively using the hybrid system as a resistor, the brake master cylinder is called upon when more friction is needed.

Those who opt for iron brakes will have 14.5″ front rotors while the carbon ceramics are 15″. Brembo six-piston calipers are standard on both systems, as are 14.2″ rear rotors. The calipers are full-floating and all four rotors have aluminum hats to save weight. Thanks to hybrid assist, your original brakes might last the life of the car.

Nothing about the Acura NSX is conventional, so we chose the most polarizing aspects based on our time behind the wheel. Starting with the styling, the NSX will always get noticed. It presents hope for the future, and kind emotions from average enthusiasts. Having an Acura badge, you won’t ruffle the feathers of the local gentry who monitor your spending habits.

With the front track wider than the rear, the Acura NSX offers great balance in the corners. Keeping the airflow happy was a top priority, so the car has subtle inlets, scoops, and NACA ducts to maximize downforce and minimize drag. Another unique aspect of the NSX is the option for 2-tone paint inside and out. From the leather to the body panels, Acura offers several appealing color combinations.