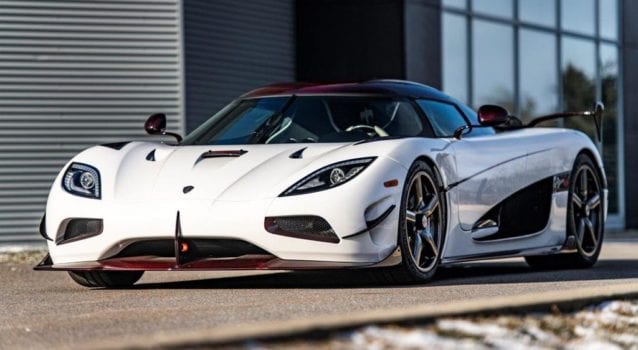 Our favorite brands have been launching new models to stay at the cutting edge of technology. In the parlance of our times, supercars are being made by almost every brand. That is why the term Hypercar became popular when hybrid technology yielded machines that are orders of magnitude more powerful than a supercar. Since selling the world’s best cars has been our domain for over 36 years, allow us to offer these for your consideration

Following the legendary Veyron, the Bugatti Chiron is simply extraordinary. Faster than its predecessor and yet keeping the heritage of the brand with a stunning performance in a combination that is absolutely unique. This Hypercar packs a quad-turbocharged intercooled 8.0-liter W-16 engine that produces 1,500 bhp to all wheels, sending you from zero to 100 km/h in 2.3 seconds and reaching a top speed of 261 mph.

1995 Ferrari F50, Rosso Corsa with red/black, race-derived 4.7 litre normally aspirated V12 engine, 6 speed manual gearbox, all-composite tub and Pininfarina designed coachwork, delivered new via Ferrari of Houston July 15, 1996 to a noted collector, re-sold in 1999 with 2,000 miles to the 2nd and current owner who has had the F50 on private display these past 21 years in Southern California, fresh annual servicing and PPI just completed at Ferrari of Newport Beach, completely original paint with carbon fibre weave visible throughout, currently fitted with Tubi headers

The design of the new GT began with its aerodynamics package, which was closely related to the ultimate focus of the design team of creating a successful Le Mans race car. Low downforce and the aerodynamic efficiency were of primary importance in the development of the exterior of the car, and this drove designers to pursue a ‘teardrop profile’ as often seen in LMP1 cars. The powertrain of the new GT, therefore, became a secondary criteria to the external design and aerodynamic performance of the car. Although a V8 and even a V12 engine were both considered, it was ultimately decided to use Ford’s EcoBoost V6 engine due to the degrees of freedom that the compact engine gave designers.

Be one of the few people in the world lucky enough to own one of these extremely rare Koenigsegg CCX’s. We purchased this car directly from the factory and it is entirely US Spec. The CCX was unveiled at the 2006 Geneva Motor Show, sporting body modifications to meet US regulations and a new 4.7 L twin-supercharged V8 engine capable of producing 806 PS (593 kW; 795 hp) at 7000 rpm and 920 Nm (679 lbft) at 5700 rpm of torque while running on 91 octane gasoline. There were 49 CCX-Series cars produced between 2006 and 2010 Call or email us to schedule a VIP Viewing of the one-of-a-kind car

Introducing the amazing, exposed bare carbon and extremely rare 2017 Pagani Huayra Roadster. This gorgeous, mid-engine hypercar succeeded the Pagani Zonda. The engine is a 6.0L, twin-turbocharged Mercedes-AMG M158 V12 engine and a 7-speed sequential manual transmission. Here is your chance to own this iconic piece of automotive history! This esteemed 2017 Pagani Huayra Roadster is the true definition of power, durability, beauty, precision, and dependability. This original window sticker of the car is: 2,643,713.49 Euros!

This car demonstrates that it is possible to create a roadster version of a supercar with unrivalled performance that is not only incredibly fast and dynamic but also extremely comfortable and safe to drive. Without a doubt, the most impressive thing is the open-top driving: the passengers are directly exposed to the sound of the engine and turbochargers, ensuring a unique and emotional driving experience. The Grand Sport Vitesse had its world premiere at the Geneva Motor Show in 2012 and completes the range of Veyron models.

The Jaguar XJ220 is a two-seat sports car produced by British luxury car manufacturer Jaguar from 1992 until 1994, in collaboration with the specialist automotive and race engineering company Tom Walkinshaw Racing. The XJ220 recorded a top speed of 212.3 mph (341.7 km/h) during testing by Jaguar at the Nardo test track in Italy. This made it the fastest production car from 1992 to 1993. According to Jaguar, an XJ220 prototype managed a Nürburgring lap time of 7:46.36 in 1991 which was faster than any production car lap time before it. The XJ220 was developed from a V12-engined 4-wheel drive concept car designed by an informal group of Jaguar employees working in their spare time. The group wished to create a modern version of the successful Jaguar 24 Hours of Le Mans racing cars of the 1950s and 1960s that could be entered into FIA Group B competitions. The XJ220 made use of engineering work undertaken for Jaguar’s then current racing car family.

The post The Best Hypercars You Can Buy Today appeared first on duPont REGISTRY Daily.