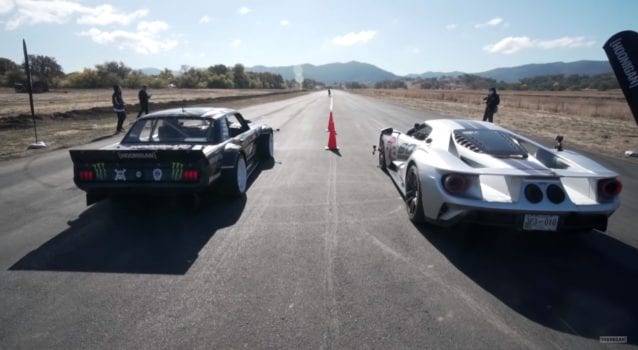 Players of Forza Motorsport know not to provoke the beast. Because it offers AWD and 1,400 horsepower, the Hoonigan team decided to film a Ford GT Carbon Edition vs the Hoonicorn Mustang. This special Christmas feature is the ultimate Blue Oval comparison. We have been delighted to see Ken Block line up against diesels, donks, and a 4-rotor Mazda to prove the potency of his car. Now we can see how it fares against the car that won LeMans.

With 647 horsepower and 550 lb-ft of torque to the rear wheels, the Ford GT is a supercar by any standard. The opponent has more than twice the power along with 1,250 lb-ft of torque. The real secret is the opposing driver. David Borla is the owner of Borla exhaust, and he has been modifying cars since he could walk. So how do these Fords compare? Tell us which one you would drive in the comments below and stay with us for all your Hoonigan uploads.