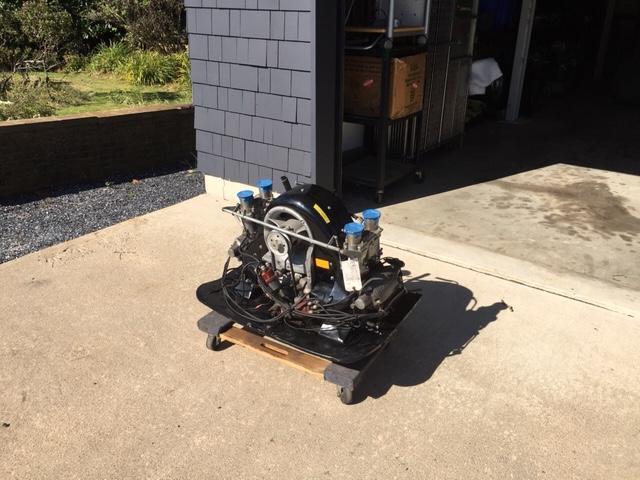 Is there a more iconic and legendary Porsche motorsport engine than the famed Fuhrmann four-cam? It’s such a recognizable shape with a unique sound and a tremendous amount of power for an aircooled engine developed in the 1950s. These engines trade hands in the low six figures, and are generally only installed in cars that cost seven figures. It’s rare to find one for sale on its own without the car. This engine holds particular value to the person with the chassis it was originally installed in. Perhaps that is you, and now you can make one yours.

This is a later V-drive distributor design engine, a type 692/0, produced in 1958. According to the seller, this engine was at some point removed from its original chassis and rebuilt by the Porsche factory. This was actually pretty common, as these engines were finicky even new, and if you didn’t rev them high enough or treat them right, they had a pretty high failure rate. Some racers of the day even swapped their four-cam engines for a traditional 356 flat four in-period for less power but increased reliability.

These engines are fascinating to see, as they derive all of their camshaft timing from helical gears shaft-driven back to the crank. Building one of these engines up from parts takes something like 100 hours of labor, because the precision and timing involved is next level.

This particular engine hasn’t been installed in a Porsche for at least three years, when the seller says it was removed from a 59 Speedster Carrera GT. The top end of the motor was rebuilt sometime around 25 years ago, at which point the camshafts were found to be of the motorsport variety found in an RSK of the day.

If you have the hundred grand or so it will take to buy this engine, head over to Bring A Trailer to bid on it yourself. As of this writing, bidding has already exceeded $83,000 with two days left.

The post Here’s Your Chance To Buy A Rare Fuhrmann Four-Cam Engine On Bring A Trailer appeared first on FLATSIXES.