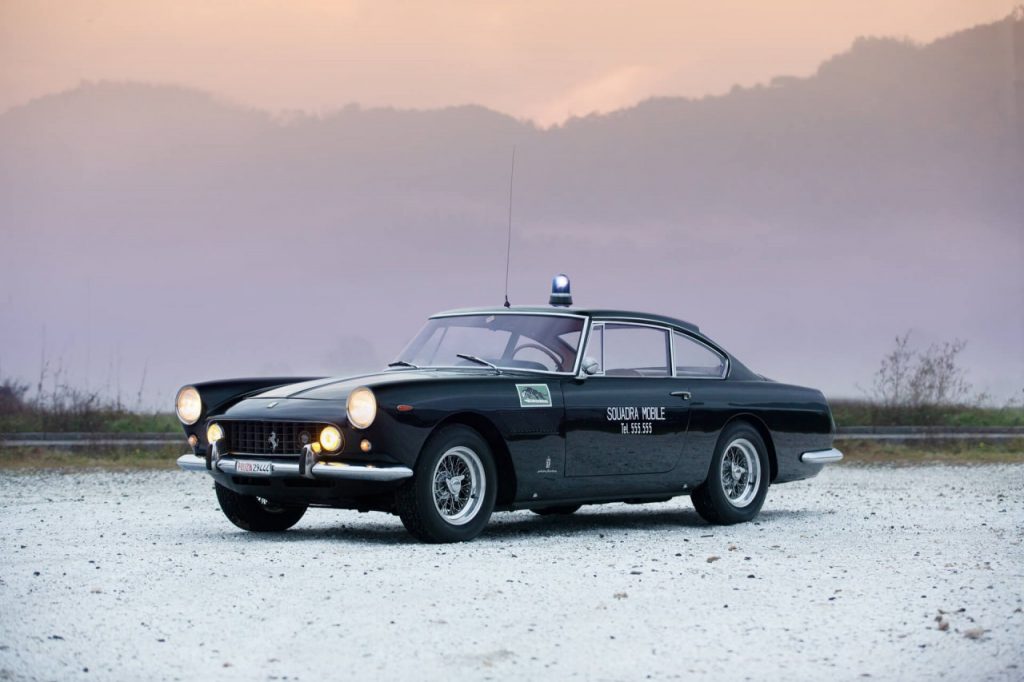 Goodwood Road & Racing has released its list of the seven coolest cop cars around the world:

No. 1 on Goodwood’s list is the Ferrari 250 GTE 2+2 Polizia. In 1962, two of these classics joined the Rome Police Force’s fleet because criminals at the time were able to outrace the traditional Alfa Romeo 1900s and 2600s police cars.

With a top speed of 140 mph and a roomy four-seat cabin, it was the perfect police car. One model retired the force only weeks after its first day, but the second car was driven for six years by the world’s fastest policeman, Armando Spatafora.

Only in Dubai can you find a Bugatti Veyron police car. The force only has one in its fleet, but it’s the car no criminal can outrun.

With a V8 under the hood and a black-and-white two-tone paint job, this police car doesn’t go unnoticed on the streets of Tokyo.

For display only, Honda lent the Australia police force this Type R to help with social media engagement. It’s equipped with a 2.0-liter turbocharged 4-cylinder making 315 horsepower, but it won’t be chasing criminals any time soon.

AC Schnitzer, a tuning company in Aachen Germany, presented the Munich police force this panda-liveried i8 as part of the ‘Tune it! Safe!’ campaign of the Association of German Automobile Tuners e.V.

Its modifications include a set of AC1 lightweight wheels; an extensive carbon-fiber package that includes a front spoiler, bonnet scoop, side skirts; a ‘racing’ rear wing, and a three-part rear diffuser and was lowered by 20 mm.

Original confiscated by Italy’s anti-mafia laws, this 458 Spider was given a few modifications to become a police car. These modifications included adding green livery, police lights and a radio and control panel.

Sadly, you won’t see this car racing around the streets of Italy but carted around educational events to teach children about the dangers of crime. The police force plans to auction off the car and donate the proceeds to victims of mafia crimes.

UK’s most popular police car was unveiled in 2014 at the Autosport International in Birmingham. It was gifted to the Central Motorway Group officers by a local dealer.

Which police car is your favorite? Share your response in the comments section below.

The post The 7 coolest cop cars in the world appeared first on ClassicCars.com Journal.