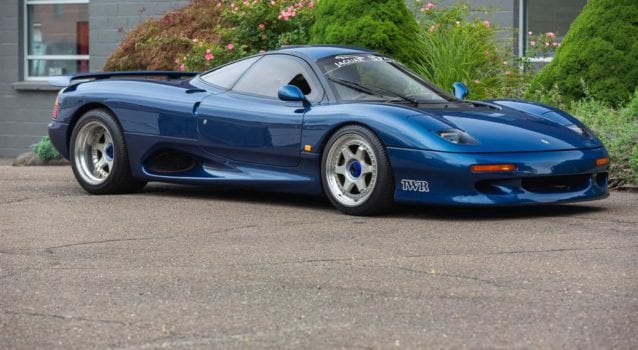 Once the Cold War came to an end, society had reason for optimism. Powerful computers that were designed to make war could now be utilized by the automotive world. This allowed the 90’s to see horsepower, torque, and fuel mileage increase by orders of magnitude. A 1990 Ferrari Testarossa made a whopping 375 horsepower. The Pagani Zonda arrived 9 years later with 555 horsepower, setting the stage for the modern hypercar. Learning to drive in the 90’s, I survived the Geo Tracker to acquire a 5.7-liter IROC Camaro. It made 350 lb-ft of torque from idle to 4,500 rpm, and it was a preview that the slow car era of the 80s would soon be far behind us. Tell us your ultimate 90’s car in the comments below!

This XJR-15 is one of the most immaculate examples we’ve ever witnessed and was first shown at The Quail, 2019. Chassis 005 is a rather early car and presents as well as any delivery-mile time-capsule would be expected to, near flawless in every aspect. Mechanically, this XJR-15 has benefited from a recent major service and was thoroughly recommissioned including a fresh clutch from AP Racing. All historic records, service documentation, manuals, and photos taken during period delivery accompany the sale. A rare opportunity to experience a mechanically fresh, yet museum-grade XJR-15 in the United States

one of 55 USA examples– 2,120 miles from new– 349 F50 worldwide– 2 owners from new – all original paint 1995 Ferrari F50, Rosso Corsa with red/black, race derived 4.7 litre normally aspirated V12 engine, 6 speed manual gearbox, all composite tub and Pininfarina designed coachwork, delivered new via Ferrari of Houston July 15, 1996 to a noted collector, re-sold in 1999 with 2,000 miles to the 2nd and current owner who has had the F50 on private display these past 21 years in Southern California, fresh annual servicing and PPI just completed at Ferrari of Newport Beach, completely original paint with carbon fibre weave visible throughout, currently fitted with Tubi headers

This stunning Spa Silver XJ220 is complete with records, tools, and full documentation present. Its major service recently performed, this example is in top mechanical condition including new Bridgestone specially-developed tires. In addition, this XJ220 has been upgraded with a titanium sport exhaust by Quicksilver, and sounds incredible compared to the stock note (though not too loud to be overpowering). Turn-key and ready to drive or present proudly in any investment-grade collection

It is a full matching numbers original paint car. 1992 Euro spec. Fully Classiche Certified by an Authorized Ferrari Dealer in 2017. Spent over 100k in service 2017. The tires are not original and have about 75% tread on it, changed in 2015. Original paint with no touch ups (only one small mark on rear quarter panel lip) Last year production with documents and full service up to date. Mileage: 9,900km, C/N: 91534, E/N: 28977, A/N: 08775, Non Adjusted- Delivery: Originally delivered to Switzerland. Only driven on special events and never street registered. Car was driven by Jacky Ickx Lemans winning F1 driver) René Arnoux, and Arturo Merzarioat the Ticino Ferrari Club meet circa 1996

The Testarossa is a two-door coupé that premiered at the 1984 Paris Auto Show. All versions of the Testarossa were available with a rear-mounted, five-speed manual transmission. The rear mid-engine design (engine between the axles but behind the cabin) keeps the centre of gravity in the middle of the car, which increases stability and improves the car’s cornering ability, and thus results in standing weight distribution of 40% front: 60% rear.

An extremely low mileage Esprit S4 we sold new. Recent servicing included timing belt, all fluids, and fresh set of tires. Contact us with any questions and for the full history of this beautiful Lotus.

The car was delivered new in October of 1996, just over one month after it had been completed at the Zuffenhausen-based Porsche works in September that same year. Finished in a stealth black exterior color over black leather interior, numerous option boxes were ticked including Automatic Brake Differential (ABD), electric seats, Porsche Sound System with CDR-210 head unit installed, On-board Computer, Litronic/Bi-Xenon headlamps and an alarm system. Driven sparingly, the black 993 Turbo had just over 12,000 miles on the odometer by year 2000

The LM002 was not the first of its kind to be built by Lamborghini. Two prototype vehicles, the Cheetah and the LM001 paved the way for LM002. Both vehicles used rear-mounted American power plants and were intended for military use, but were not well received. With the idea of using a front-mounted Countach V12 to power the LM001 came the next model, the “LM002”, which was the first of the three to see actual production by Lamborghini. The LM002 is part of a series of vehicles, the Lamborghini Militaria.

CALL FOR PRICE :: CALL FOR MILEAGE

The Z1 is unique for its plastic body panels and vertically sliding doors which drop into the door sills. It is one of the first BMWs to use a multi-link rear suspension. The sole drivetrain specification is the 2.5-litre straight-six engine and 5-speed manual transmission from the E30 325i. The doors are unique in that they retract vertically, instead of traditional designs which swing outward or upward (the first car with retractable doors was the 1954 Kaiser Darrin, although those Kaiser Darrin doors slid forwards not downwards). The body with its high sills, offers crash protection independent of the doors, and it is possible (although perhaps not legal in some countries) for the Z1 to be driven with the doors lowered. The windows may be operated independently of the doors, although they do retract automatically if the door is lowered. Both the window and door are driven by electric motors through toothed rubber belts and may be moved manually in an emergency.

The post The Best 90’s Cars You Can Buy Today appeared first on duPont REGISTRY Daily.