Skip to content
Latest News
Signs you need to Replace your Mercedes
What Education Does a Technician Need to Work in a Mercedes-Benz Factory?
Markus Schafer Interview in Car Magazine
[SPIED] Nice Idle Sound from 2023 Corvette Z06 with Z07 in Amplify Orange
These 31 Corvettes Eagerly Await Your Bid at Maple Brothers’ Kansas City Auction
Sales Launch Mercedes EQS SUV: from 110,658.10 euro
Order from Corvette Central Before August 22nd and Pick Up Your Parts at Corvettes at Carlisle
PICS: First Look at the 2023 Corvette Dark Stealth Exterior Badge

Back at the 2019 LA Auto Show, Ford unveiled its latest entry to the Mustang family to the world for the first time. It was quite the shocker, as it was like no other Mustang that’s ever come before. Not only was it fully electric, something that would upset Mustang-faithful by itself, but it was also a crossover. The name of the car blinded most car enthusiasts, as calling an electric crossover a Mustang seemed more sacrilegious than almost anything they’d seen before. However, now that more than a year has passed, and many journalists have now driven the all-new Mustang Mach E, it seems that if you can get over the name, it’s a great EV crossover.

From launch, the Mustang Mache E will come in a few different flavors; Select, Premium and California Route 1. A ‘GT’ model will be coming late 2021, with more performance. For now, though, the electric Mustang only comes with pretty so-so performance, thanks to either a 68 kWh battery or an 88 kWh battery and either single or dual motor. 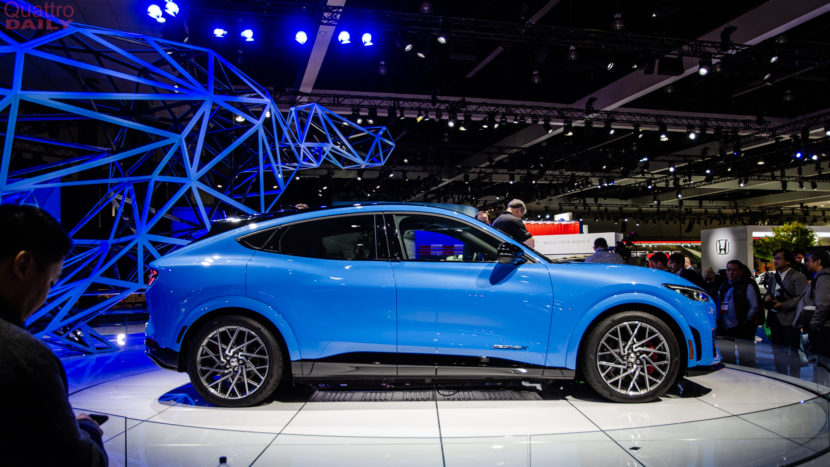 The most exciting model at launch is the Mustang Mach E Premium Extended Range AWD (Ford needs to work on its nomenclature as much as the Germans do). That car comes with 346 horsepower and 417 lb-ft of torque, as well as the big 88 kWh battery pack and 270 miles of range. According to Ford, 0-60 mph happens in 4.8 seconds, which is as quick as you’ll ever need. Plus, its all-electric torque means that it feels punchier than that.

According to several reviews, the Mustang Mach E errs on the side of luxury, rather than sportiness. So its suspension is soft and comfy, its steering is light and easy and it’s cabin is calm and quiet. A traditional Mustang it is not.

However, that doesn’t mean it’s bad. Quite the contrary, actually. It’s said to be rather nice to drive, with accurate steering and a capable chassis that doesn’t mind being tossed around. It’s no performance machine but it will gladly respond to your inputs if you ask nicely enough.

Then there’s it’s interior. The cabin of the Mustang Mach E is surprisingly nice, with materials that befit a $50,000 car, a massive touchscreen infotainment system that works surprisingly well and refinement that is above most other Ford products. 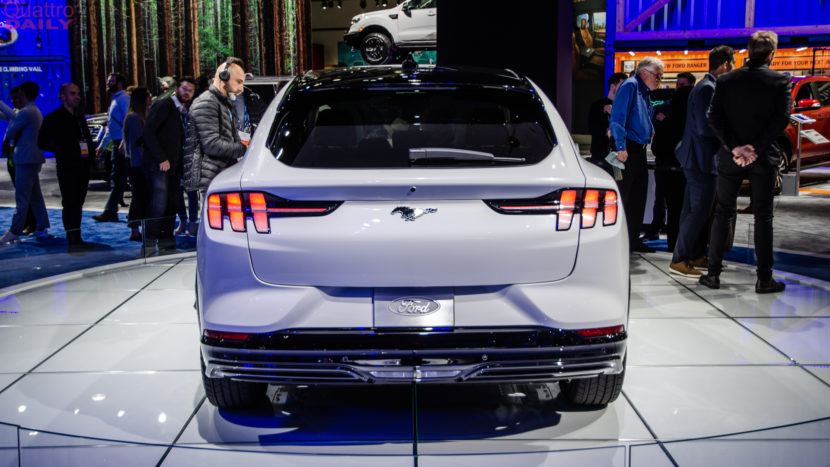 The Mustang Mach E starts at around $43,000 for the “Select” model with just 230 miles of range but that’s still not too shabby, considering it’s a decent sized crossover with 29 cubic feet of cargo space and seating for five. Yes, the Tesla Model Y has 326 miles of range to start and seats the same amount of people but it starts at $49,999. The $50,000 Mustang also has 300 miles of range but is only rear-wheel drive, to the Tesla’s all-wheel drive.

So while it’s competitive, the Model Y still has the edge over the electric ‘Stang, in terms of outright specs. Having said that, there are advantages to getting the Mustang Mach E. It’s much better looking than the Tesla, for starters, but it’s also built by a brand with a far better track record of reliability and with a massive dealer network. So if something breaks or you need service, you’re going to have a far better experience in the Mustang than the Tesla.

Where does Audi fit into all of this? The Audi e-tron Sportback is already significantly more expensive than the Mustang, with less range. So it’s already at a value disadvantage. Sure, the e-tron is far more luxurious and absolutely lovely to be in and drive. However, as an EV, it’s the Mustang Mach E that likely provides the better electric driving experience. 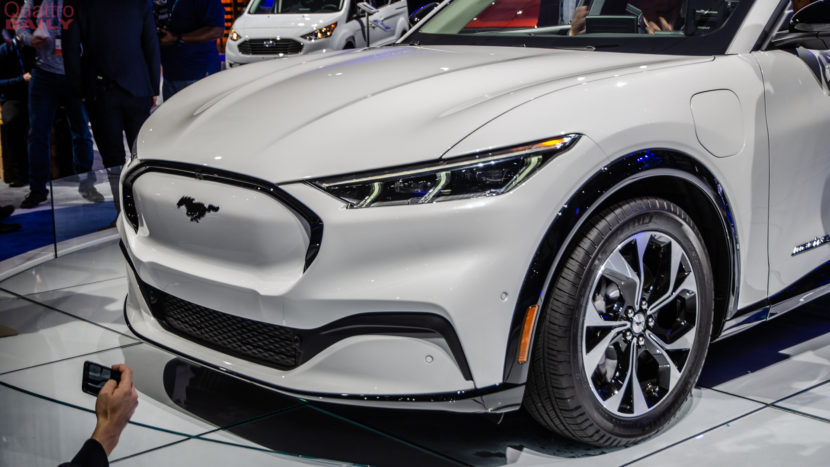 All of this means that Audi now has a real competitor from Ford on its hands, as does the entire market. When the Mustang Mach E was first introduced, most of us rolled our eyes at the absurdity of tarnishing the Mustang name by cynically slapping it on a crossover for marketing purposes. Marketing nonsense aside, though, the Mach E seems to be a great EV at an affordable price and one that many American EV customers should take very seriously.