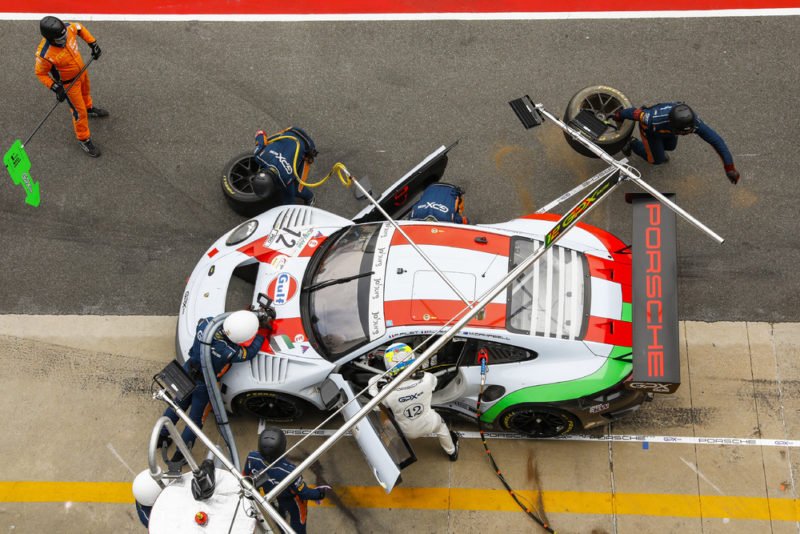 This weekend in Africa, Porsche scored enough points with a third-placed finishing position in the 9 Hours of Kyalami to clinch its second IGTC championship in a row. Porsche’s 2020 championship hinged on winning the 24 Hours of Spa, as it had a podium finish at the 12 Hours of Bathurst but placed poorly at the 8 Hours of Indianapolis. Getting top honors at the double-points-paying Spa event got Porsche back on track and meant that with BMW’s poor Spa showing it didn’t need to win the Kyalami race. Porsche just needed to keep its head up and score a decent finish. And grabbing third is more than decent, I would say.

The final race of the four-race season went down this weekend at the Porsche-owned Kyalami Grand Prix Circuit in South Africa. Porsche factory aces Matt Campbell, Mathieu Jaminet, and Patrick Pilet teamed for an assault on what would be a very dark and very wet 9 hour event. The trio ended up finishing third in the GPX Racing Porsche 911 GT3 R. Two other Porsche race cars competed in the race, finishing seventh and tenth in the 12 car field. Campbell, Jaminet, and Pilet finished third three times this season, at Bathurst, Spa, and Kyalami, scoring 45 total championship points, which wasn’t quite enough to overtake the BMW team which won to take home 50 points on the season. 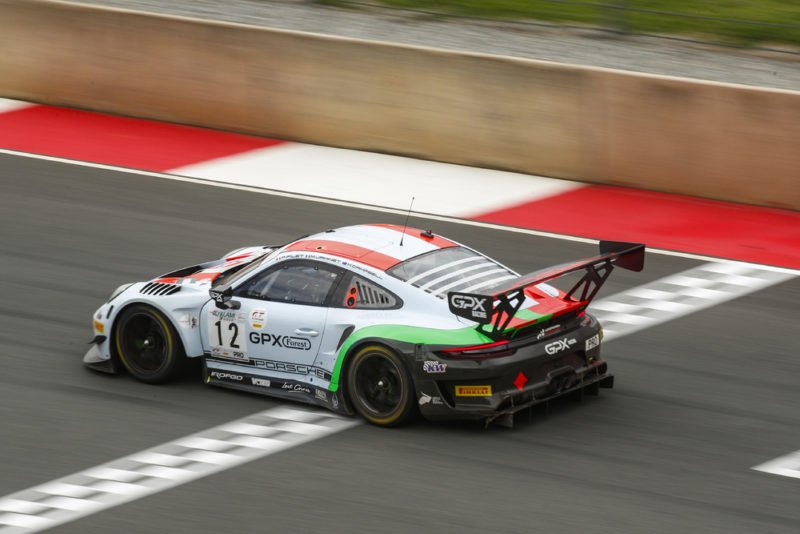 At the start of the race in sunny and humid conditions, Porsche’s factory aces kept pace with the field, just pounding out laps and doing what was necessary to survive in the African summer. The GPX Racing team suffered a tire puncture about four and a half hours into the race, which sent them tumbling down the order. Around the same time, the Porsche of Laurens Vanthoor, Kevin Estre, and Earl Bamber were hit with a two-lap deficit to fix a broken front splitter, which cost them any chance of being competitive for the remainder of the event. 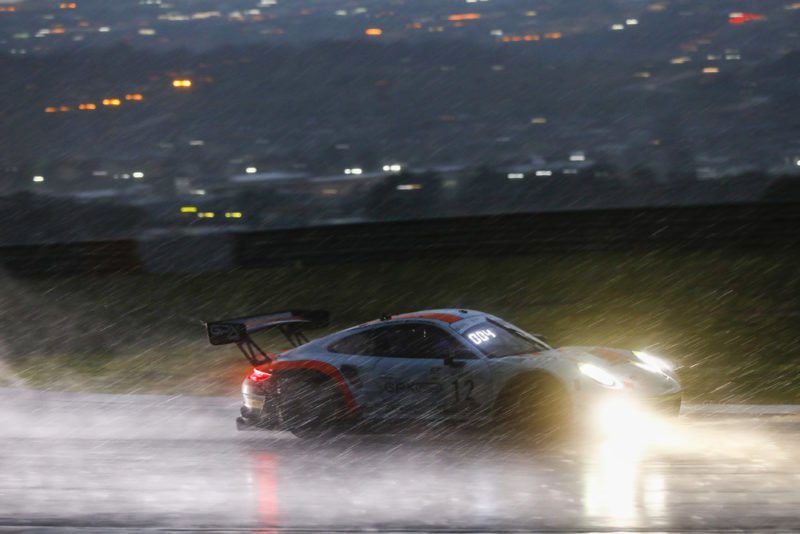 With just an hour and a half left in the race, rain fell by the bucketload and added to the intense tension of what had already been a close race. After the field bunched up during a safety car phase, suddenly the GPX team was back in the hunt. Matt Campbell closed the race for the Porsche team, and he was hoping to push to the end for a couple more positions, having earlier set the fastest lap of the race. Sadly, it was not to be, as the safety car stayed out for the remainder of the race, to prevent cars spearing off the track in downpour conditions. 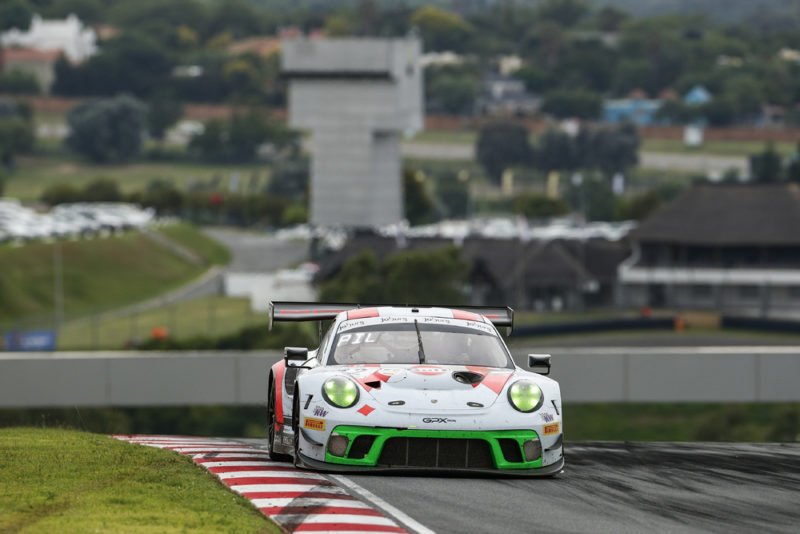 Porsche scored 21 points from Kyalami, getting the Stuttgart constructor up to 100 points on the season. Next nearest was BMW with 76 points and Audi on 74. Audi sent four factory-backed cars to the Kyalami event, hoping to score big, but ultimately even with a second placed finish overall, couldn’t knock down Porsche’s points tally.

Sebastian Golz (Project Manager Porsche 911 GT3 R): “Winning the title for Porsche was our big goal – and that’s what we did. The drivers’ crown would have been the icing on the cake, but we missed out by a mere five points. Still, reclaiming the manufacturers’ championship title shows just how hard everyone worked on this joint success in 2020. That applies to the customer teams and drivers as well as to our Porsche employees and partners. Congratulations as well to Lechner Racing. Despite the incredibly difficult conditions, they did a flawless job in the Pro-Am class.

Patrick Pilet (Porsche 911 GT3 R #12): “We were well on track until the puncture threw us back. We never gave up and worked our way up the field again with strong stints and a smart strategy. We could’ve done even better, but unfortunately, the race remained under yellow to the end. We would’ve loved to have had one last chance to pull out all stops in a thrilling finale and fight for victory and the drivers’ championship – unfortunately, that didn’t happen.”

Kévin Estre (Porsche 911 GT3 R #54): “We’re devastated, of course. We had a car that was capable of running at the front. We had everything we needed to clinch the drivers’ crown. When the front splitter came loose, it was all over. That’s a great pity! At the end of the race, the conditions became extremely challenging. Rain, lightning and darkness made it impossible to see anything, even driving very slowly under full course yellow. I couldn’t even drive the allowed 80 km/h. That was scary.” 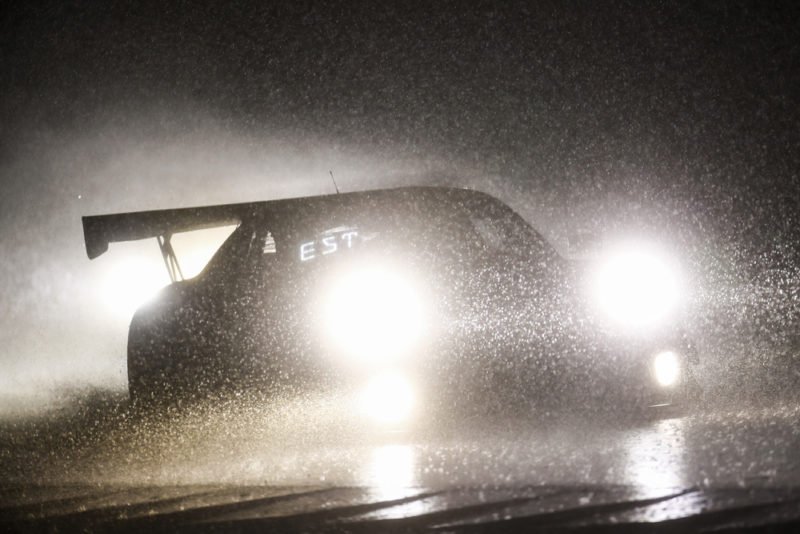 The post Porsche Defends Intercontinental GT Challenge Title With Podium Finish At The 9 Hours Of Kyalami appeared first on FLATSIXES.