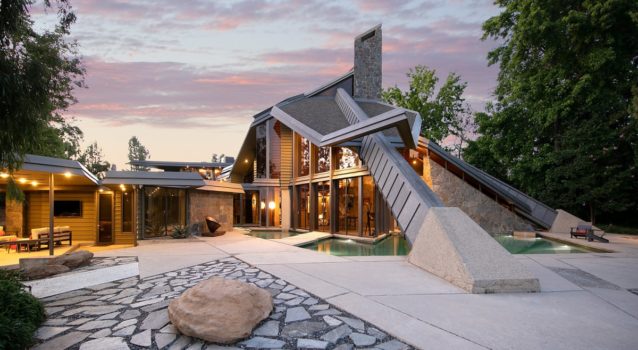 As Wilt Chamberlain and his architect, David Tenneson Rich, stood at the site of a former Cold War missile launch in a secluded hilltop lot, Rich drew a square, a circle and a triangle in the dirt. He asked Wilt, “Which one feels right to you?” Wilt stepped inside the triangle and immediately felt comfortable, so the story goes.

And so, a triangle trophy home that would come to be known Ursa Major was constructed. The angled home built of concrete, steel and stone is surrounded by water elements and stretches 40 feet tall in its great room. The entrance parallels the grand scale and geometric shape with a 14-foot-tall, one-ton triangular front door. Its Brutalism style architecture takes inspiration from Frank Lloyd Wright and the world travels of Lakers legend, Wilt Chamberlain.

The Ursa Major moniker hails from Chamberlain, himself, who is nicknamed the Big Dipper because the seven-foot-one center has to dip his head when he walks through average-height doorways. He wanted the home to feel comfortable for friends of all heights. Even with its grand scale, the home’s Redwood touches, wood-burning fireplace and sunken living room make it feel warm and inviting.

The estate boasts six bedrooms, eight bathrooms and a total 9,395 square feet of living space. It has had multiple owners since its construction in the early 1970s, and has undergone several renovations. Set on 2.5 acres, there are also two motor courts that can accommodate up to ten vehicles. The expansive pool’s immense size would no longer be able to be built under today’s current codes. Ursa Major is a mansion that defies comparison and cannot be duplicated.

Photography via Hilton & Hyland and Realtor.com