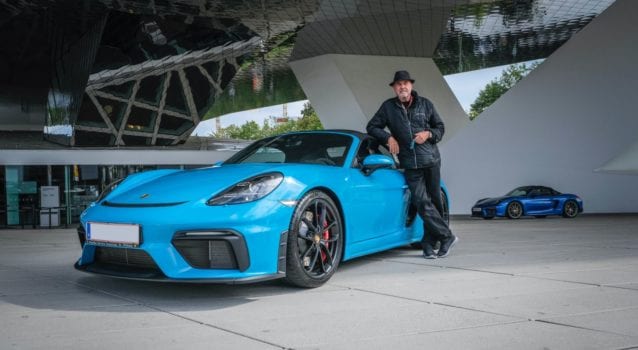 For many enthusiasts, owning 79 cars would be enough. One man decided to make room for one more, and a Porsche collector celebrated his 80th birthday with his 80th Porsche. In the latest press release from Porsche Newsroom, Ottocar J. describes his love of the brand. Taking delivery of a 2021 Boxster Spyder in Miami Blue, it was just as exciting as the others in his collection. “I came the first time in 1977. A 911 Carrera 3.0 was waiting for me then”. Because his enthusiasm for Porsche is known around the world, technicians allowed him to instal the hood badge after personal congratulations from Dr. Wolfgang Porsche.

The new car will join a collection that includes a 917, 956, a 910 with eight-cylinder power, and a 964 Cup car. His 904 retains the original Fuhrmann engine, and the most prized pieces of memorabilia are featured in the living room of his home in Vienna. When he has visitors, they are taken aback by racing cars on the left and the evolution of 911 models on the right. Because he enjoys driving, 9 cars are on standby in the garage. These daily drivers include a 911 R, 991-Series Speedster, Boxsters, and Spyders. All it takes is a few minutes behind the wheel for this addiction to begin, so click the button below to find yours and stay with us for more amazing Porsche collections.