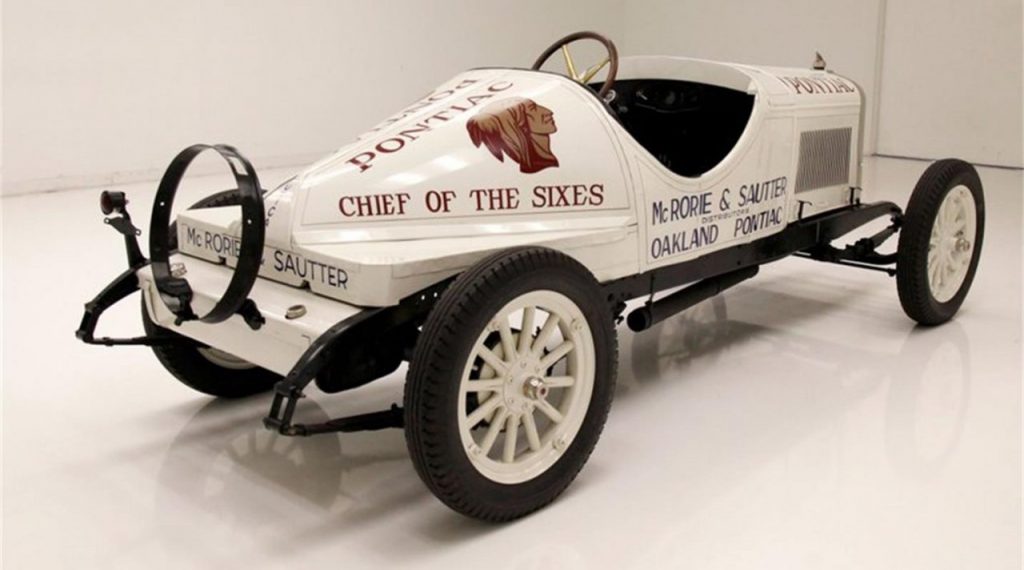 As the story goes, a 1926 Pontiac 2-door sedan was destroyed in a fire but was sent by the Pontiac dealership in Utica, New York, to coachbuilder Willoughby, also located in Utica, for resurrection. Reborn as a 1926 Pontiac boattail speedster, the car is being offered for sale on ClassicCars.com by a dealer in Morgantown, Pennsylvania.

The result is reported to be the first Pontiac race car.

To this day, the dealer notes, evidence of the fire damage can be seen in charring of part of the car’s wood flooring. The reborn speedster was designed to compete in hill climb races promoting the McRorie-Sautter Pontiac dealership, the dealer adds.

“Willoughby was famous for high-end coachbuilding, however this was a quick and dirty conversion with simple steel over wood from the dashboard back,” the advertisement explains.

“This documented car is Pontiac’s earliest known race car. Our consigner and his wife have gone to great extents to not only bring the car back to its original racing form, but also document the history of Pontiac racing. Can you say provenance?”

The speedster weighs 1,750 pounds, some 600 less than the damaged donor sedan.

“It’s in true racing form, stripped to the basics,” the advertisement says. “Sporting a nickel-plated radiator surround topped with a beautiful ‘Chie’” radiator cap, (the likes of which you will not see another, on a race car!), fronting a cowled hood then to the open simple cockpit and for the back of the car of this era the boattail design proved popular although did not do much for actual aerodynamics which really were an afterthought, if thought of at all, at this time.

“Plenty of racing sponsorship is emblazoned on top of the white paint (its original racing color livery in the ‘20s) with signage hand painted from photos of the period, the name of our dealer/builder McRorie & Sautter, Pontiac letter badges and the rear ‘Pontiac Chief of the Sixes’ with the chief head profile.

“On the back, the ring for a spare is there, sans a rubber surrounding tire. Other notable modifications that have taken place of original equipment of the sedan are an open 3-inch exhaust, 21-inch Buffalo wire wheels which are included with the purchase.

“Presently the car sits on a set of correct 20-inch wood-spoke wheels. Noted the body is sheet metal over a wood subframe and the failed wood underneath the metal was rebuilt by the consignor, his wife and friends using period correct fasteners then the original metal was painstakingly refinished per the 1926 photos.”

The shifter knob remains as it was when Warren Mandeville drove the car in hill climb competitions.

The car has a 186.5cid inline 6-cylinder engine that came out of the donor sedan, though the intake and exhaust manifolds were upgraded to 1928 specification.

True to the day, the car has only rear brakes.

“The car starts right up and is an easy drive,” the seller promises. “It handles well and is very sound mechanically being constantly maintained since the full restoration in 2001. A definite thrill ride open to the road and track where you interact with it much closer than you may want!”

The seller says the Pontiac speedster has won a succession of AACA honors as well as a trophy from the Amelia Island concours.

The car is being offered for $330,000. To view this listing on ClassicCars.com, see Pick of the Day.

The post Pick of the Day: The earliest-known Pontiac race car appeared first on ClassicCars.com Journal.