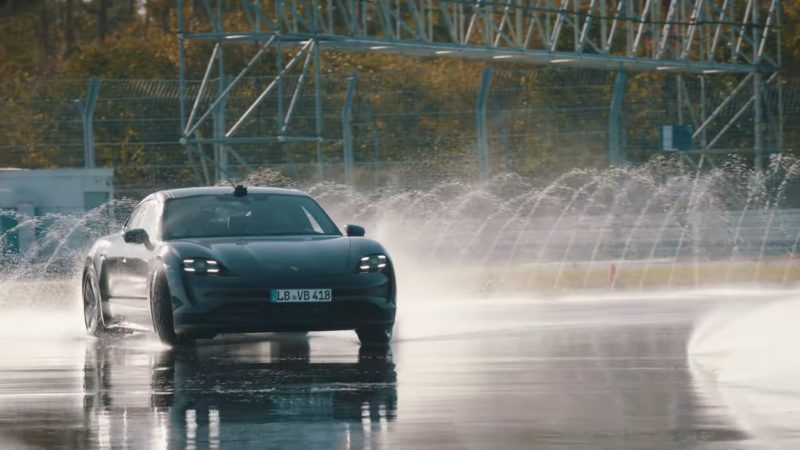 Thus far the Porsche Taycan has only been available in all-wheel drive configurations. Well, in the U.S. and Europe, that is. In China the company sells a rear-wheel drive configuration Taycan (which, by the way, I would really like to buy). That rear-drive model recently set a new world record for longest continuous drift, and let me tell you, it was a really long drift. The record was set at Germany’s Hockenheim race track by Porsche Experience Center instructor Dennis Retera, who held the Taycan sideways for 55 straight minutes, covering 26.2 tire-spinning miles.

“GPS and yaw rate sensors within the vehicle were used for documentation purposes, as was a camera installed on the roof of the track’s control tower, with which the record ride was filmed,” Porsche said in a statement.

By virtue of having just an electric motor on the rear axle, the China-spec Taycan has less power than the AWD Taycan 4S, Turbo, and Turbo S that we get now. With a mere 469 horsepower on tap, I’m sure it wasn’t easy to get that electric car to roll its tires. That’s sarcasm, of course, as I can drift my 100 horsepower 912E with ease. Give a professional driver a nearly-500 horsepower car with a long sedan wheelbase and it’ll drift with relative ease.

In any case, I absolutely cannot imagine drifting anything for almost an hour! That’s what makes this record seem so interesting. Not only can the Taycan spin its wheels much faster than its groundspeed, but it can keep that power going through the drivetrain to the tarmac for an hour before it runs out of juice. I can’t imagine a 469-horsepower gasoline car drifting for an hour without running out of gasoline, so that’s impressive by any standard.

What do you think? Can your Porsche drift for an hour?