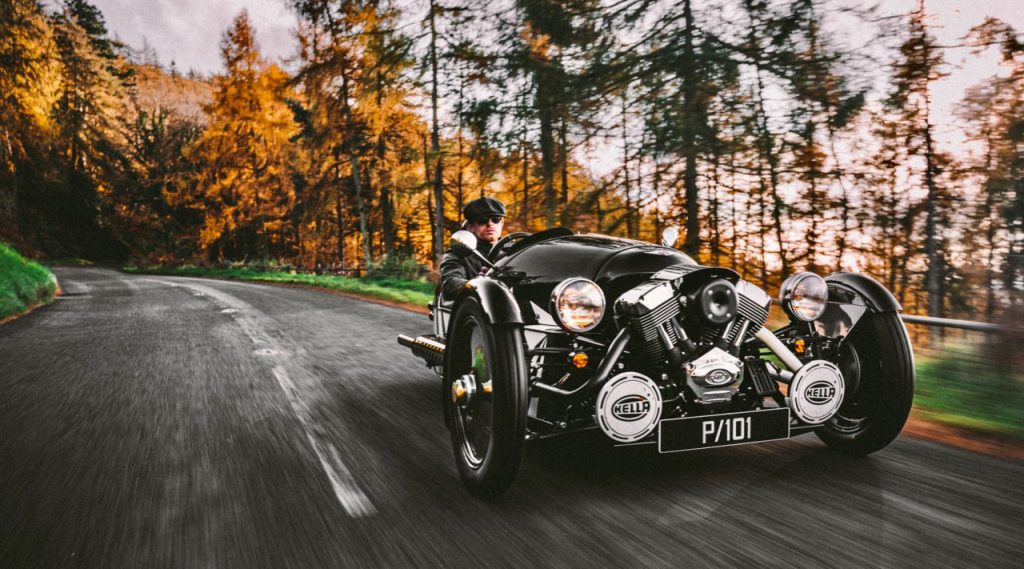 Morgan will mark the end of production (at least for now) of its classic 3 Wheeler model with 33 examples of the 3 Wheeler P101. The cars will offer new features and will be available in five “art pack” versions.

Morgan also said that “the Morgan 3 Wheeler will return,” but did not suggest when the next version might become available. The current model was introduced in 2011.

P101 is shorthand for Project 101, Morgan’s internal name for the revival of the 3 Wheeler more than a decade ago. To date, the company has produced more than 2,500 examples of the latest version.

“A striking single-leaf tonneau cover – first seen on Morgan’s EV3 concept in 2016 – has been deployed to exaggerate the asymmetrical theme, and is intended for single occupant use,” the company said of the 33 end-of-production-run cars.

“The composite resin cover exhibits a natural translucent golden color, not dissimilar to materials witnessed on engine shrouds for 1970s race cars. The tonneau is lightweight, streamlined, and honest in both its design and manufacture.

“The Aero-disc wheels – painted to match the main body color –– provide a further streamlined visual and define the look of the P101, making it instantly recognizable as a unique model. The low-drag Aero-disc wheels work together with low-slung Hella 9-inch spot lamps, positioned to reduce turbulence around the suspension and wishbones, whilst also giving the car a more forward-leaning aesthetic.

“Adding to the asymmetry and split identity of the P101, alternated black-and-white ceramic-coated exhausts contrast left to right of the model. Further detailed additions include torque markers on each front tire, straight-cut exhausts, a fly screen, additional louvres, exposed rivet details, and unique P101 markings. Together, they evoke the sense of excitement felt around the company when the original prototypes were being developed.”

Morgan produced its first three-wheel vehicle, the Runabout, in 1909. The company continued 3 Wheeler production until 1952, when it switched to conventional 4-wheel automobiles, at least until 2011.

“Production of the most-recent 3 Wheeler has been a thrilling and exciting chapter in Morgan’s history,” said Steve Morris, Morgan Motor Company chairman and chief executive. “The significance of the original Three Wheeler is undoubted, however the introduction of the ‘current’ 3 Wheeler in 2011 proved to Morgan, and the world, that fun cars still have a place and that the ‘why not’ attitude is sometimes best.

“The P101 celebrates the raw and stripped back nature of the 3 Wheeler, and provides us with the perfect opportunity to draw an incredible chapter of Morgan’s history to a close. Once the 33 examples have been created, the opportunity for an exciting new chapter for three-wheeled Morgan vehicles begins.”

The cars will be available in Deep Black or Satin White Silver, with four “art packs” of special graphics:

The Belly Tank — A tribute to liveries on the belly tank racers and “lakesters” that inspired the latest generation of Morgan 3 Wheelers.

The Race Car — Stripes and roundels in homage to early Morgan racing cars.