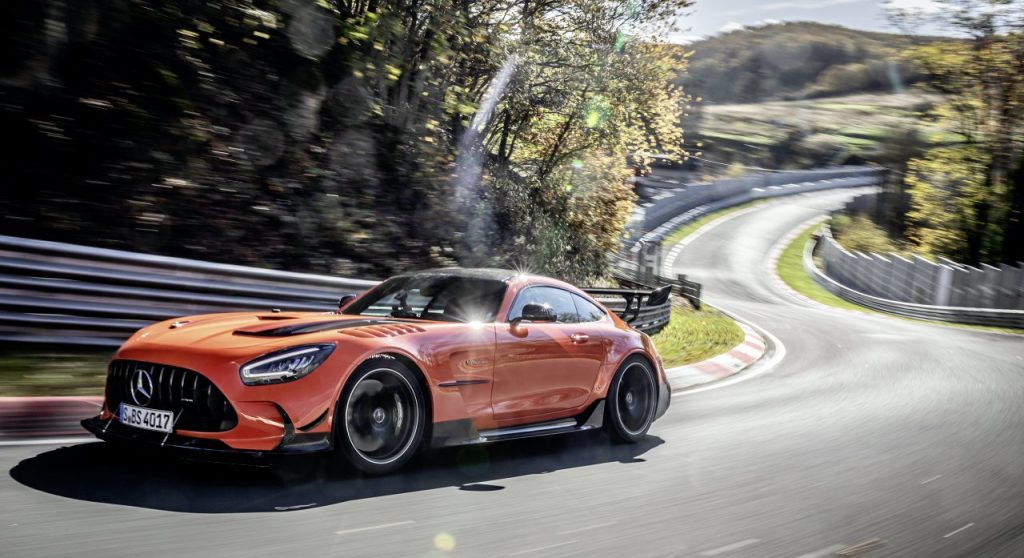 Mercedes-AMG says its GT Black Series has set the fastest lap of the famed Nurburgring Nordschleife by a standard and unmodified production car, with a time of 6 minutes, 43.616 seconds for the 12.8-mile circuit. For good measure, Mercedes-AMG said the car was timed at 6:48.047 on the 12.944-mile “total track.”

GT3 racer Maro Engel was the driver for the record-setting lap in the 720-horsepower supercar that Mercedes-AMG says its GT Black Series has set the fastest lap of the famed Nurburgring Nordschleife by a standard and unmodified production car, features sophisticated aerodynamics such as a front carbon fiber splitter that extends in “Race” mode and with rear wing blades in their middle position.

The car ran with camber in the maximum position of negative 3.8 degrees in front and negative 3.0 degrees at the rear. The 9-position traction control was set between 6 and 7, depending on the section of the track where the car was running.

“Mercedes-AMG GT Black Series customers can also take advantage of all these settings and adjustment possibilities,” the company noted.

The lap was done on Michelin Pilot Sport Cup 2 R MO tires with “soft compound,” the standard equipment for the car.

“That was a really impressive ride,” Engel was quoted.”With speeds of up to almost 168 mph in the Kesselchen section of the track and well over 186 mph on the long Döttinger Höhe straight, the AMG GT Black Series is significantly faster than my GT3 race car.

“To finally drive around the Nordschleife in 6:48.047 minutes with a production road car in these track conditions is really awesome. Like my GT3 race car, the AMG GT Black Series offers a lot of adjustment possibilities, all of which enabled me to create a setup that was tailor-made for me.

“It’s really impressive how much downforce the Black Series generates and how confident and reliably it can be driven, even at the absolute limit.”

Mercedes AMG noted that the outside temperature was 44.6 degrees Fahrenheit and that some sections of the track in the late afternoon run were “not totally dry.” It added that the lap times were “measured by neutral experts from “wige Solutions,” an independent notary which also certified the condition of the vehicle.