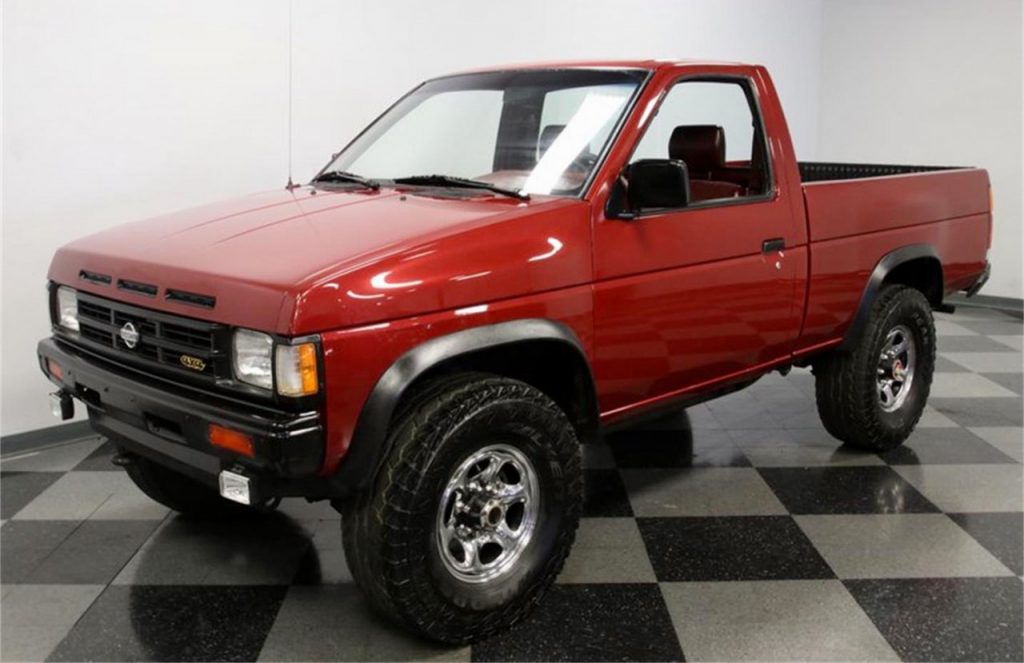 Back in the day, well, at least for those of high school age in the 1980s and early ’90s, it was likely that your first new car wasn’t a car at all but a pickup truck that was compact in size and in price. The Pick of the Day is such a truck, a 1991 Nissan Hardbody 4×4 advertised on ClassicCars.com by a dealer in Concord, North Carolina.

“This is the rugged and robust 4×4 from that ideal era when the smaller import trucks were nearly indestructible,” the dealer notes in the advertisement. “That’s how Nissan’s trucks earned the Hardbody name. So it’s great to find this 1991 Nissan Hardbody 4×4 so well presented, just like you always remembered them.”

Datsun started building trucks in Japan in the mid-1930s. The compact 620 model was exported to the North American market in the early 1970s. By the early 1980s, the updated 720 version was being assembled in the US in Tennessee and a few years later the generation known internally as D21 was being designed in San Diego.

The “Hardbody” designation came from the double-wall construction of the pickup bed. Standard and King cab versions were available, with 6-foot or 7-foot pickup beds, and soon a 4-door Crew Cab with a short bed joined the lineup, as did a V6 engine.

The truck on offer “looks both tough and stylish,” the dealer points out. “It’s got a mean-looking flat face, and there was already plenty of flare in the fender even before Nissan’s upgraded plastic pieces that help accommodate the larger wheels on this lifted 4×4.

“But there’s also something attractive about the details, like the full-length pleat in the sheetmetal that remains straight on this well-respected example. And a respray of the correct Burgundy Metallic really gets this one radiating in the sunshine.

“But as good as this looks, it was built to be a functional pickup. You see it everywhere in useful features, from the fog lights up front to the plastic liner protecting the truck bed.

“There’s more red waiting for you inside, and it all looks as well-presented as the exterior. The carpeting, door panels, headliner, dash, and seat all have a nice color and a well-resected presentation. The overall condition is a great representation of why these earned a tough-as-nails reputation.

“You will find useful features, like provisions for air conditioning (will need serving to blow cold again) and an AM/FM/CD stereo. And the great-looking red steering wheel has low spokes to give you a clear view to the full gauges — including a large speedo and tach.”

The Hardbody is powered by a 2.4-liter fuel-injected 4-cylinder engine.

“The way this one fires up reaffirms the everlasting nature of a well-maintained Nissan truck, and the five-speed manual transmission gives you full control. The motor’s level of originality will make this a true stunner as the market continues to grow nostalgic for these tough Nissans.

“But more than just collectable, this pickup has a lot of work and play left in it, too. The two-speed 4×4 transfer case and Falken Wildpeak A/T tires get you deep into nature. Plus, power steering and front disc brakes make it easy to run around town or the trail.”

The dealer is offering this combination of “nostalgia and ability” for $14,995. To view this listing on ClassicCars.com, see Pick of the Day.

The post Pick of the Day: They called it ‘Hardbody’ for a reason appeared first on ClassicCars.com Journal.