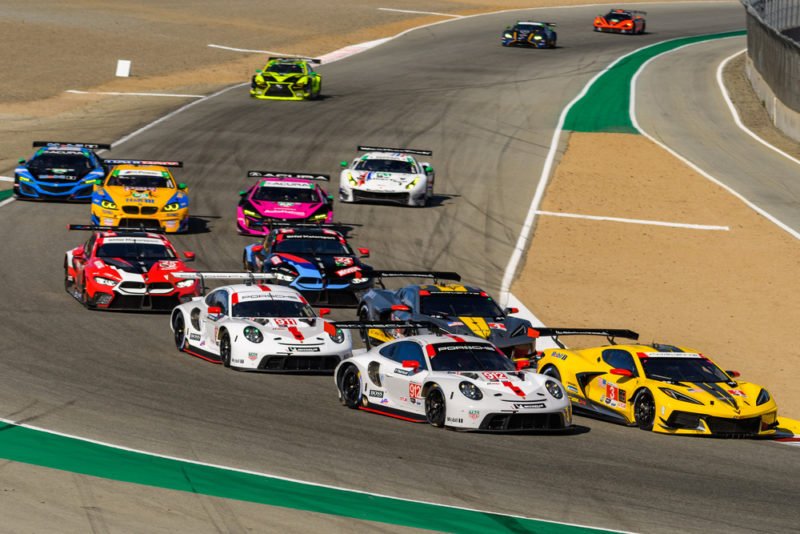 After a string of terrible luck throughout the summer, Porsche’s GT team has finally found its stride. After winning Petit Le Mans in October, the 911 RSR again found its way to winner’s circle for the second race in a row. Laurens Vanthoor and Earl Bamber pushed through to victory, which netted the team its first win at Laguna Seca! In all these years of Porsche competition in IMSA, it’d never won here. And it all came down to perfect strategy and keeping the car out of trouble.

In order to maximize the team’s chances, Porsche split the two cars onto different strategies. With temperatures approaching 90 degrees, and track temps over 120, tire management was key to the effort. Fred Makowiecki and Nick Tandy in the #911 car ran minimal laps in qualifying, sacrificing track position in the 6-car class for better tires at the start of the race, opting for a two-stop strategy. Vanthoor and Bamber (the pairing known as BamThor) opted for a three-stop strategy on softer Michelins. 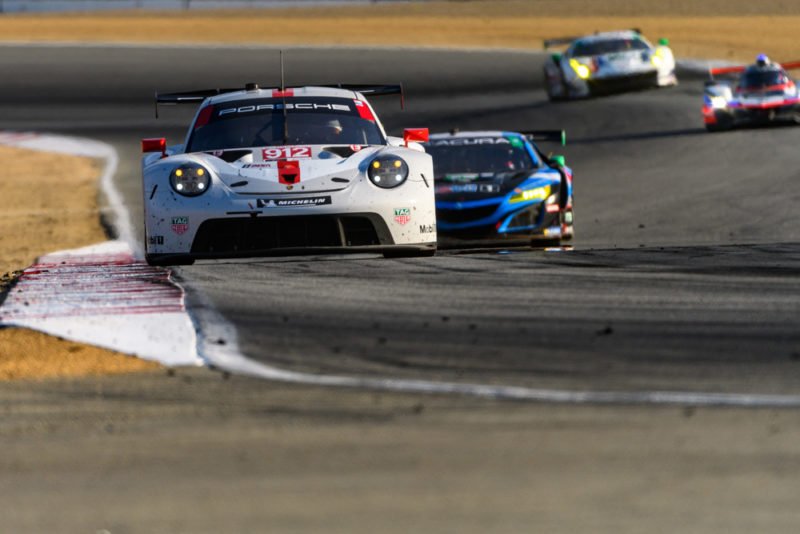 Starting from second on the grid, Vanthoor maintained the position behind the pole-sitting Corvette through the first 17-lap stint. He stopped before the leading Corvette for the undercut, which paid dividends, pushing the Belgian into the lead. Going into a late-race caution, both Porsches were sitting pretty in first and third. The #912 had much newer tires and managed to keep the lead through the restart to get to the checkered flag. The #911 car, however, sitting in third, was on positively ancient tires by comparison, and lost third to a Corvette shortly after the race went back to greeen with 13 minutes left on the clock.

This was the penultimate race for the legendary Porsche Motorsports North America squad, which will be disbanded after the 2020 season. The next race, the eleventh and final in 2020, will take place on November 14th at Sebring for the 12 hour race which was cancelled in March. 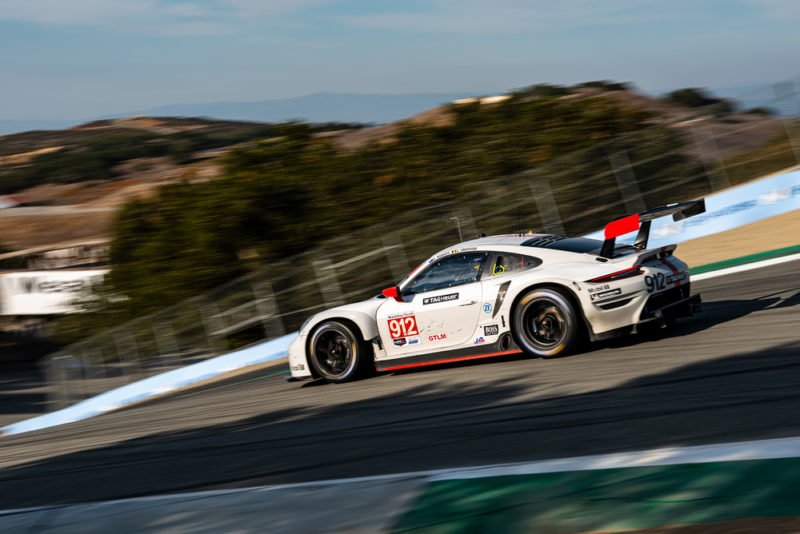 Pascal Zurlinden (Director Factory Motorsport): “What a great day for Porsche and the successful customer teams. In the afternoon, Proton Competition claimed the title in the European Le Mans Series, at the same time, the two 911 GT3 R fielded by Herberth Motorsport scored a double podium result in the ADAC GT Masters – and now the IMSA victory. We’ve finally won at Laguna Seca, as well. This success is the result of perfect teamwork. Our strategists implemented a clever plan, the team did quick pit stops and the drivers made the most of the 911 RSR’s potential. Congratulations everyone!”

Steffen Höllwarth (Head of Operations IMSA Championship): “We were determined to win today because Laguna Seca was a blank spot on the map. We’ve now managed to tick that off. We made a deliberate decision to use different strategies so that we could be prepared for all eventualities given the high temperatures. This worked perfectly with our number 912 car, but not with the sister car, unfortunately. It’s a shame that Nick couldn’t hold on to the podium position after the safety car phase. At that point, he was running on the most worn tyres by far, so he was handicapped. Still, we’re delighted about the tremendous final result.”

Frédéric Makowiecki (Porsche 911 RSR #911): “At last, a Porsche RSR wins a race at Laguna Seca. We’ve tried to do this since the beginning of our factory program in 2014, but it’s taken until today to succeed. Congratulations to our colleagues in the 912 car. Unfortunately, not everything ran smoothly strategically for us, otherwise, we would certainly have reached the front of the field. Now I’m looking forward to the endurance race at Sebring.”

Laurens Vanthoor (Porsche 911 RSR #912): “That was a real team effort – everyone played their part perfectly – particularly our pit crew. Since we had to make three pit stops, the refueling times were shorter than in a normal race. That meant that our lads had to complete the wheel changes flawlessly in record time. It worked very well, as you saw at the first pit stop when I was able to take the lead. This is the first win of the season for us in the 912 car. It’s the second in a row for Porsche. We’re finally achieving the results we deserve with the new 911 RSR.” 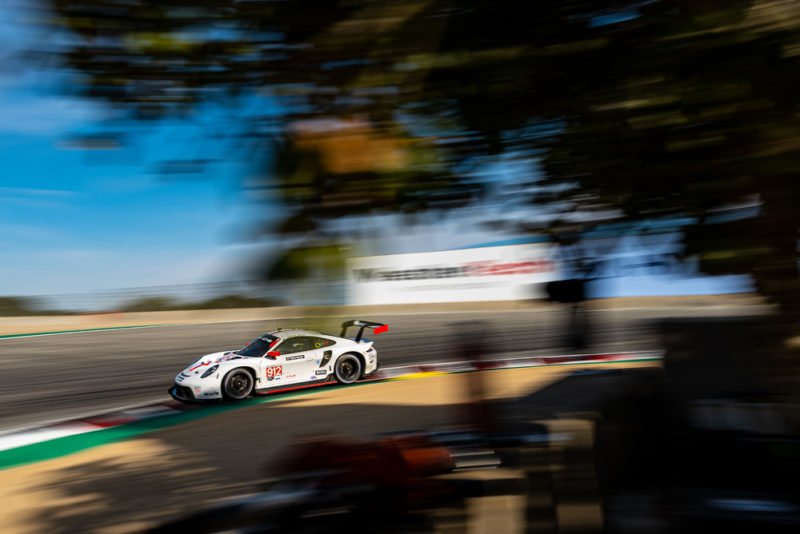 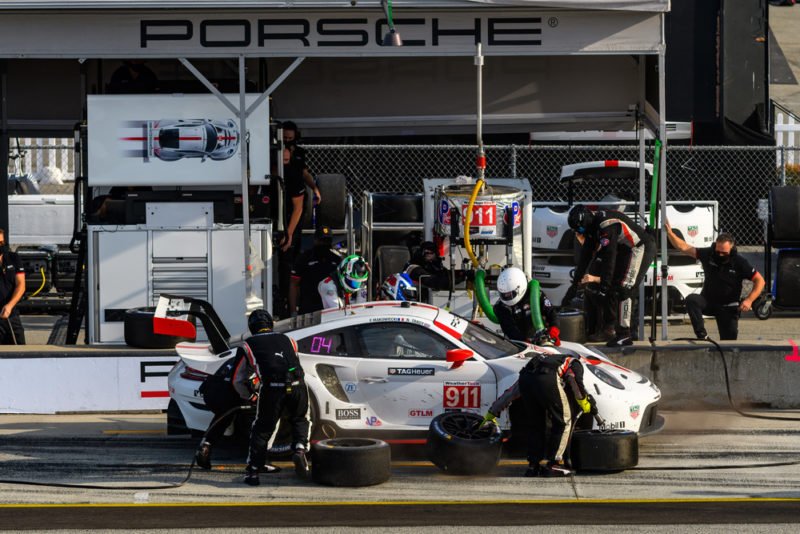 The post Porsche Turns Luck Around To Find Victory Lane In Laguna Seca IMSA Round appeared first on FLATSIXES.