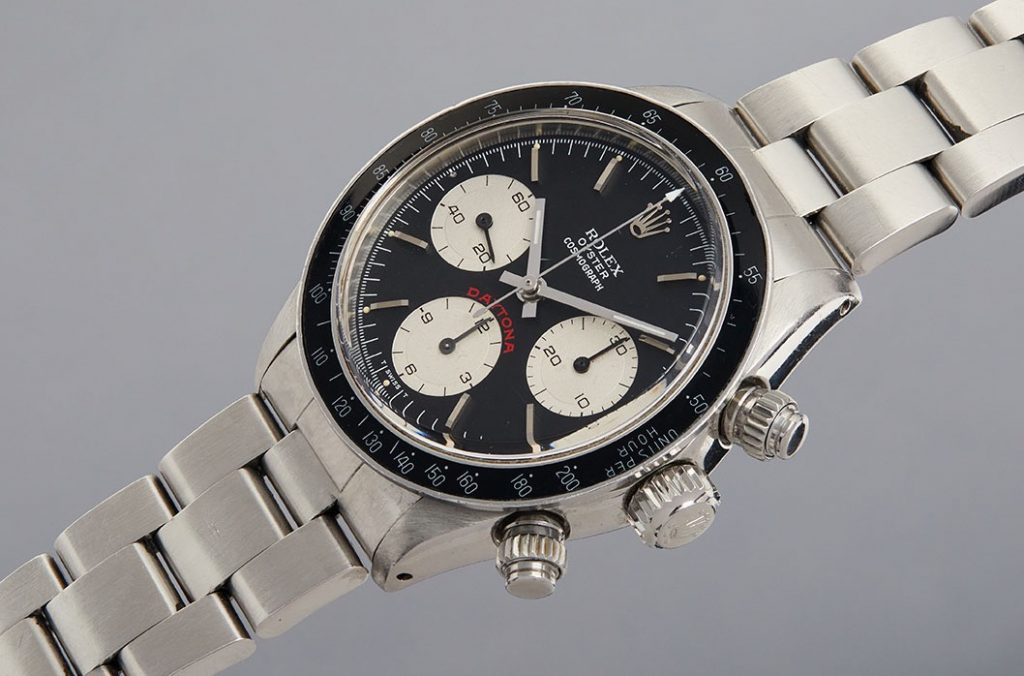 Featured will be Newman’s “Big Red” Rolex Cosmograph Daytona, which was inscribed “Drive slowly Joanne” by Newman’s actress wife, Joanne Woodward, as well as the Heuer Monaco worn by McQueen during the filming of Le Mans.

According to Phillips, Newman gifted the watch to his daughter, Clea Newman Soderlund and McQueen gave his watch to Haig Alltounian, his personal mechanic.

“While many know Joanne Woodward and Paul Newman as actors and philanthropists, their names signal something more to watch collectors – an extraordinary impact on the field of watch collecting,” Paul boutros, Phillips’ head of watches, Americas, is quoted in the auction house announcement.

“Throughout his lifetime, Paul Newman was photographed wearing a small handful of Rolex Cosmograph Daytona watches. Without any doubt, it is this association with Paul Newman that has led to the Rolex Daytona being universally regarded as possibly the world’s most sought-after wristwatch.

“Of these, the watch he owned and wore the longest is the present ‘Big Red’ Daytona Ref. 6263. It is amongst the most exclusive handful of watches with impeccable Newman-family provenance… With the support of Clea’s sisters and with a portion of proceeds benefiting charitable organizations founded by Paul Newman, we are thrilled and honored to offer what is one of the most storied vintage Rolex watches of our era.”

Woodward gave the watch to Newman for their 25th wedding anniversary in 1983, and the engraved request refers to a motorcycle accident in 1965 and his later work in the Indy-racing movie, Winning.

Phillips expects the watch to sell for more than $1 million at auction.

The McQueen timepiece is engraved “To Haig Le Mans 1970” and was given to the mechanic after filming was completed. Alltounian has owned the watch since and is the consignor to the auction.

“The Heuer Monaco will always be associated with the glamor and thrill of auto racing,” Boutros said. “Preserved in superb, original condition with its fascinating caseback engraving remaining perfectly crisp, it can certainly be considered as one of the most important Heuer wristwatches of all time.

“Worn on McQueen’s wrist while driving the film’s Porsche 917 at speeds above 200 mph, its incredible provenance, wonderful state of preservation, and adrenaline-fueled history make it an ultimate trophy watch for the connoisseur.”