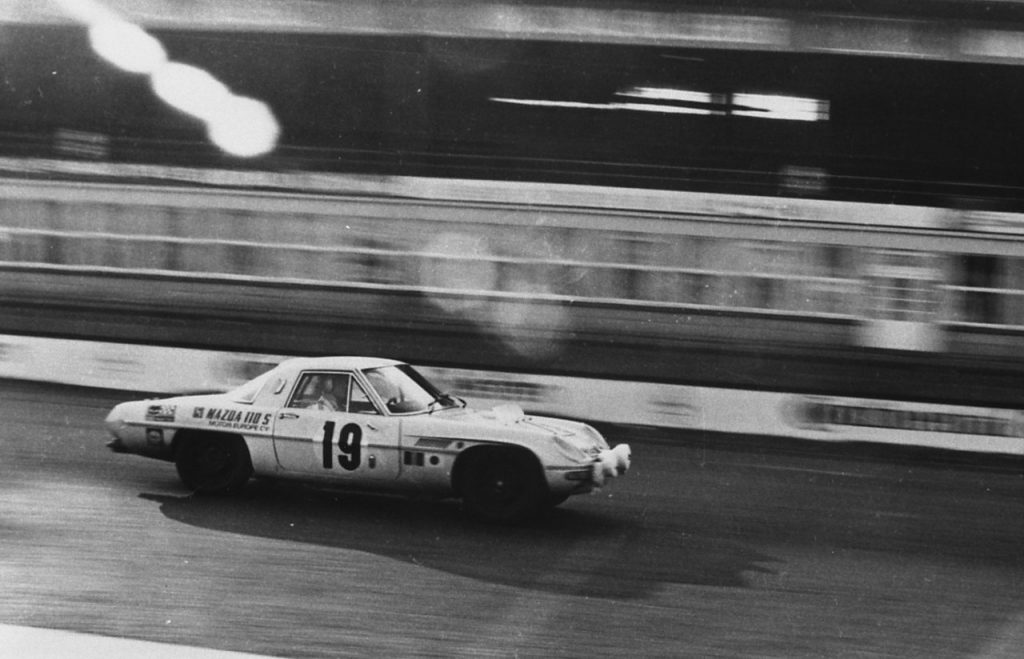 “By demonstrating its products in the public eye, putting them to the test against rival manufacturers on the racetrack and rally stage, Mazda validated its technology, marketed its cars across the globe and inspired countless privateers to compete in their own Mazdas at all levels of motorsport,” the automaker said as it celebrated its motorsports history as part of its corporate centennial.

“This never stop challenging approach has seen Mazda compete from the very earliest stages of the company,” it added.

Founded in 1920 as the Toyo Cork Kogyo Company, what would become Mazda turned the following year for leadership from industrialist Jujiro Matsuda the following year. Matsuda moved the company into machine-tool production.

He also saw the popularity of motorcycle racing in Japan, noted that most of the bikes were imported or build from imported parts and saw an opportunity for business and for promotion of the company. A 250cc 2-stroke prototype was developed and, “to everyone’s surprise, it won its first race beating a British-made Ariel, which was one of the most-respected and fastest bikes of the time,” Mazda notes.

From 2-wheelers, the company moved into production of a more practical 3-wheeler, a sort-of motorized rickshaw that it called the Mazda-Go. That machine’s name eventually (in 1984) becoming the name of the entire company.

Mazda produced its first automobile, the R360, in 1960. Later that decade came the Cosmo Sport, which Mazda launched a pair of its new and rotary-powered sports cars by competing in the 1968 Marathon De La Route, an 84-hour race around the Nurburgring circuit in Germany. One car crashed but the other finished fourth behind two Porsche 911s and a Lancia Fulvia.

Beaten only by “two of the finest sports cars in Europe… Mazda, the rotary engine and the stunning Cosmo had made their mark,” the company notes.

A trio of twin-rotor R100 coupes were entered in the 24-hour race at Spa Francorchamps, Belgium, in 1969, two of the cars finishing 5th and 6th behind a quartet of Porsches.

Back in Japan, Mazda also was racing, challenging the Nissan Skyline with the RX-3 coupe in touring car events and posting a 1-2-3 finish in the 1972 Fuji Grand Prix.

“The RX-3 also became a popular and successful race car around the world – competing in the USA, Europe and Australia,” Mazda reports.

“Yet arguably the car that really put Mazda amongst the sports car greats was the Mazda RX-7.

“Across all three generations this Mazda icon took part in racing and rallying in a huge myriad of specifications in the hands of both the factory and privateer entrants. The Mazda RX-7 was used for Mazda’s first factory entry at Le Mans 24 Hours, but it was overall victory at the 1981 Spa 24 Hours – the first for a Japanese brand – that really put the RX-7 on the map. Alongside winning the British Touring Car Championship in 1980 and 1981, these victories for the British TWR team firmly established the RX-7 in the UK.”

The RX-7 also was successful in the GTU class of sports car racing in North America, winning championships 7 years in a row.  The RX-7 also competed in the World Rally Championship despite being driven only by its rear wheels against competitors with 4-wheel drive.

“For all the brand fame achieved by the motorsport activities of the Cosmo, R100, RX-3 and RX-7 coupes,” the company notes, “it’s Mazda’s association with the world’s most famous race — the 24 Hours of Le Mans — that stands above all else.”

Mazda took what it calls a “first toe-in-the-water” look at Le Mans in 1970 when it’s 10A rotary engine was installed in a British-built Chevron chassis.  The car was sidelined after 19 laps, but Mazda returned in 1973 and by 1981 was racing at Le Mans with its own Mazdaspeed team.

Soon, Mazdaspeed moved from the RX-7 to purpose-built sports prototype cars to compete in the Group C level of endurance racing. Mazda won a succession of class victories.

Finally, in 1991, a rotary-powered Mazda 767B driven by Volker Weidler, Johnny Herbert and Bertrand Gachot became the first Japanese entry to finish first overall in the Le Mans race.

Mazda also was successful in Group A rallying with its conventionally powered 323, and the introduction in 1991 of the MX-5 (Miata) introduced sports car racing to a new generation of privateer competitors around the world.

“Even better, when it comes to racing on road course circuits in the USA, more private competitors race a Mazda or a Mazda-powered car than any other brand,” the company reports, “and across the world from Mexico to Australia, from Europe to North America, and at home in Japan, Mazdas are chosen by drivers and teams to race and rally — highlighting the driver’s car ethos at the heart of every Mazda.”