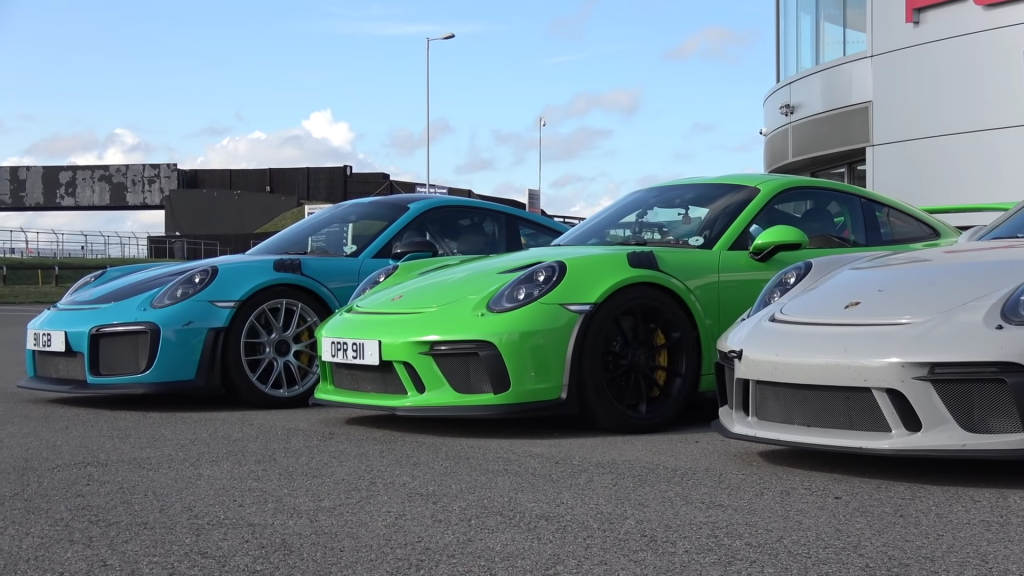 Any car nut would figure the standard GT3, devoid of big wings and louvers over the , would be the best on the public road. Less keyed in, less assertive, less likely to tramline, and much more accessible to the average driver—these are all traits that one would want when the road is pockmarked and uneven. However, when the straights are lengthened, the surfaced smoothed, and the speed limit removed, how do the RS’ angular additions change the experience?

Join Mr. JWW as he takes us on a tour around Silverstone in three of the greatest cars to leave Stuttgart in some time. The many long, fast, sweeping corners at Silverstone showcase the reasons to go RS.

Immediately, the GT3 RS’ additional grip and stability, particularly through the grit-your-teeth-and-pray portions of Silverstone, are evident. It’s also more incisive; any understeer issues that limited the standard GT3 have been minimized significantly by the deeper front splitter and wider track. If the front is more eager to turn in, the driver naturally pushes a little harder.

Though the standard GT3 can be ordered with a PDK gearbox, the RS is the one which benefits the most from it. Why? It changes the way long and/or tightening corners must be covered. A mid-corner shift with a traditional h-pattern transmission can unload the rear long enough to provoke a slide, and so certain bends have to be short-shifted into so that the driver does not lighten the rear at the point when the car is most heavily loaded. However, when there’s a PDK gearbox shifting in hundredths of a second, the driver doesn’t need to worry about a mid-corner snap; they simply pull the paddle when the needle is about to brush the redline.

The Challenges and Limitations of Real Torque

It’s a little unfortunate that the heavens decide to open when Mr. JWW leaves the pitlane in the GT2 RS. Rain is the great equalizer, after all, and he has to roll on the throttle more cautiously than he did with the normally-aspirated versions. Nevertheless, even with a delicate prod of the throttle, he still manages to pull an additional 15 miles per hour down the Hangar Straight. Look at his astonishment after effortlessly reaching 165 mph on the Hangar Straight.

That straightline advantage may be the GT2 RS’ greatest advantage, though it comes at a small price: a less favorable balance due to the additional weight in the rear. At higher speeds, the downforce should mask that, but quick direction changes and slow-speed “tosses” are more effortlessly achieved in the atmospheric version.

Nevertheless, seeing the way the GT2 RS casually dispatches with the normally-aspirated versions makes any minor decrements in agility easy to forget. At the fast, flowing, and genuinely frightening Silverstone, that additional power must make one feel like they’re getting to play with all the cheat codes engaged. With nearly 200 additional horsepower, the GT2 RS has no difficulty passing the GT3—or most cars, for that matter.