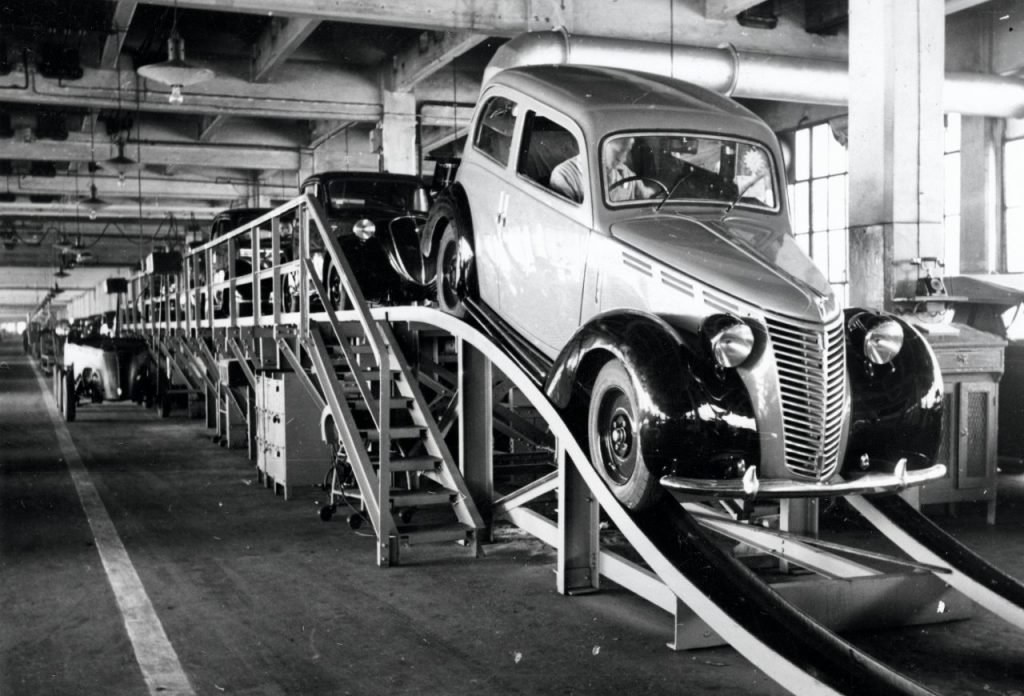 “Lingotto Vive & Revive, quand’era una fabbrica” (Lingotto Lives & Relives, When it was a factory) is the theme of an exhibition at the Lingotto Shopping Center in Torino, Italy, where the history of the former Fiat factory with its rooftop test track is being celebrated.

The exhibition runs through December 31 and features drawings, photographs, films and vehicles produced at the historic factory from the early 1920s until the late 1980s.

The factory opened in 1923 “and is still admired today for its extraordinary modernity, elegance and for the breathtaking solution of the rooftop test track, which at the time astonished many architects,” according to FCA Heritage. “Long before it was finished, what had been conceived as a workplace became a symbol of Italian industry and inventiveness and very soon entered the country’s collective memory.

“Over the decades it became the birthplace of numerous legendary models and contributed to the motorization of Italy, until new production processes needed to move to plants that responded to a different technological logic.”

Even then, “Lingotto found ways to renew itself to adapt to the needs of a changing urban context and – while remaining a symbol of industrial archeology – the factory has undergone a long process of internal restructuring, leaving its charismatic external appearance unchanged.”

The Canadian Automotive Museum in Oshawa, Ontario, says you don’t have to fear its ghost – its vintage Rolls-Royce Silver Ghost – although the museum was the setting for a recent YouTube production featuring Brittney Crabb and her ghost-hunting series.

By the way, the museum will offer a 2-hour automotive walking tour of downtown Oshawa on October 31 at 11 a.m., tracing the history of “Canada’s Motor City,” including the McLaughlin Motor Car Company.

If you have a Bank of America or Merrill credit or debit card with a photo ID, you can receive free admission to the Indianapolis Motor Speedway Museum the first weekend of each month, starting November 7-8.

Other museums, including art and science centers, across the country also are included in the program. For details, visit the “Museums on Us” website.

The IMS Museum also announced that Joe Hale is its new president and will begin his assignment January 5, 2021.

According to the announcement of his post, “His larger goal is to reimagining the museum in a wholesale fashion and to guide the museum staff and supporters toward a future state-of-the-art museum, community asset and world-class destination.”

Hale is an Indiana native who for the past five years has been executive director of The Dreamland, a non-profit film and cultural center which he transformed on Nantucket Island, Massachusetts. He also has been a high school teacher, worked in commercial real estate and was interim president of an energy company. He was co-founder of the Global BrightLight Foundation, which provides solar-powered lanterns to off-grid families around the world.

The news release says, “To mark the 10th anniversary of the League of Legends World Championship, the Mercedes-Benz Museum in Stuttgart presents a retrospective looking back at the champions of the past 10 years.”

The championship trophy, the Summoner’s Cup, has been on display at the Mercedes museum. The 2020 world championship takes place October 31. Mercedes and Riot Games are putting up 10,000 virtual “Hextech chests” for fans of the competition. Mercedes also offers a special tutorial with YouTube stars Zac and Jay for those not familiar with the league.

The California Automobile Museum in Sacramento has re-opened and will extend the exhibition, “Reel Cars: The Importance of Cars in Filmmaking,” that had opened before the coronavirus pandemic forced the facility to close back in the spring.

The museum is open Thursday to members and Friday through Sunday from 10 a.m. to 5 p.m. for other visitors.

The Gilmore Car Museum in Hickory Corners, Michigan, will stage a “Haunted Hunt” on October 29, 30 and 31.

The newest Mustang at the Mustang Owner’s Museum in Concord, North Carolina, will be featured October 31. That Mustang is Skeletang. On Halloween, children visiting the museum in costume will be given a Mustang die-cast treat.

Kids in costume get free admission October 31 to the Miles Through Time automotive museum in Clarkesville, Georgia.

The Lane Motor Museum in Nashville, Tennessee, offers free admission to active and retired US military personnel (plus as many as 3 guests) during Veteran’s Day weekend, November 5 to November 9. The museum also will be beginning its Toys for Tots Drive that weekend. Donate a new unwrapped toy worth $10 or more and receive free museum admission.

The Mullin Automotive Museum in Oxnard, California re-opens to the public on November 6. New hours will be Friday through Sunday from 10 a.m. until 3 p.m.

The Mustang Owner’s Museum in Concord, North Carolina, will host an Early Generation and Mustang II car show on November 7. However, due to coronavirus restrictions, only the first 25 cars to register will comprise the show.

Don “the Snake” Prudhomme, co-author Elana Scherr and their book, My Life Beyond the 1320, will be featured from 10 a.m. until 2 p.m. November 14 at Autobooks-Aerobooks in Burbank, California.

Members of the Arcane Auto Society get featured parking on the plaza in front of the Blackhawk Museum in Danville, California, from 11 a.m. until 1 p.m. on November 7. On November 15, that honor goes to the Bay Area Jaguar Club and Jaguar Associates Group.

“In the decades before America paved its highways, early riders had to be prepared for all sorts of terrain: sand, clay or dirt – and wandering those makeshift byways were Harley-Davidson motorcycles,” the museum notes. “Today, it’s called off-road or adventure touring; back then it was just called riding.

“Since 1903, Harley-Davidson motorcycles proved their toughness by riding over wooded hills, through stone-choked creek beds and up mountain sides. ‘Off-road Harley-Davidson’ tells the history of motorcycles designed for rough roads, the people who rode them and the adventures they shared.”

The Lane Motor Museum in Nashville, Tennessee, will include vault tours as part of the regular admission fee on November 27.