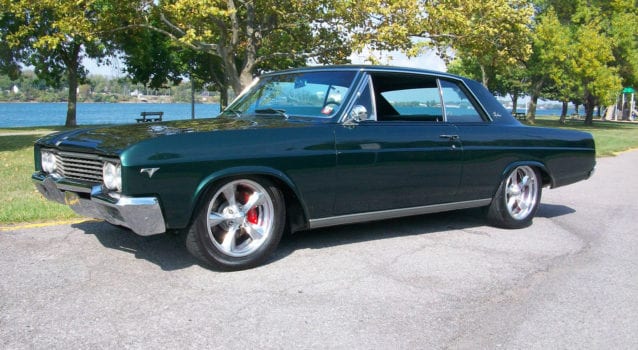 While the Roadmaster, Invicta, and Electra were the top models, Buick decided to build something to fill the gap between their luxury models and the entry-level Special. What once was a trim level arrived as an all-new model in 64. Riding on the same chassis as the Chevelle, the Buick Skylark focused on comfort. Because the bodies were stronger and more insulated, the springs and shocks were more relaxed than the Chevelle or the Cutlass.

This car was built to show and to go. While it is as clean to eat off of, the underside of the floors and frame have been restored to factory condition. The Moser 9″ is a modern replacement for the weak 10-bolt. This was needed to handle the power from the big block 461 stroker. Built by Phillips & Wilkerson Racing Engines, the dyno sheet verifies 492 horsepower and 527 lb-ft of torque. It is backed by a Tremec T5 HD 5-speed and an SFI bellhousing.

While other brands sold cars on horsepower, every Buick in the 60’s was advertised on its torque. Carroll Shelby said it best “Horsepower sells cars, torque wins races!” Given the curb weight of 2,900 lbs, this car has a better power-to-weight ratio than an F-18 fighter. Aside from the headers, people will easily see the Stage 1 Air Cleaner and assume it is a base model Grand Sport. But once you are done at the car show, it will run single-digit times in the quarter-mile. It may look like your grandma’s car but it also will run down anyone with ease.

This lot is one of the vehicles offered at GAA Classic Cars’ upcoming auction in Greensboro NC November 5-7, 2020.  Register to bid online or in-person today!