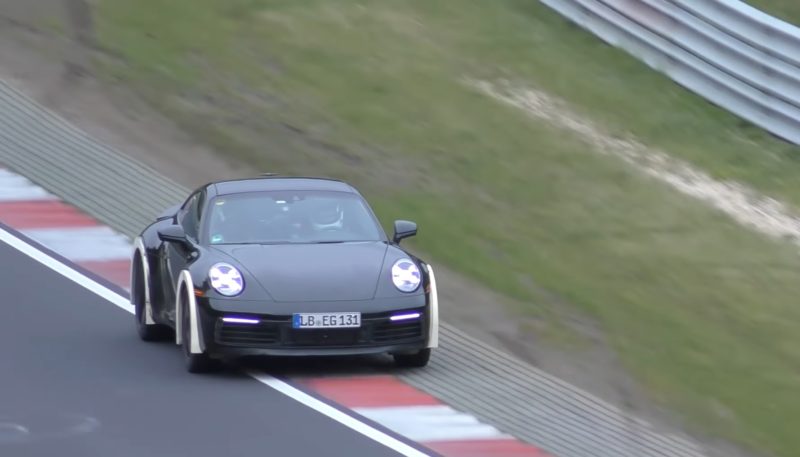 Here’s a weird one. Earlier this week the Porsche shown here was spied testing at the Nurburgring. It looks pretty much like a regular 992 Carrera 4S but it’s sitting much higher on its suspension and has weird fender flare wheel arches. In the spy video below from StateSideSuperCars, this oddball 992 is powersliding all over the place, jumping curbs, and generally hauling butt. Judging by the sound of its exhaust the car is turbocharged, though that’s hardly a surprise as all 992 models are currently turbocharged (at least until the next gen GT3 hits the real world). So what is this thing? Is Porsche capitalizing on the Safari market by selling one straight from the factory? Is the company going to try to regain its Dakar championship?

It’s far more likely that this is just Porsche testing some oddball suspension setups to see what its car does under extreme circumstances, but if Porsche does want to introduce an off-road sports car, this would hardly be the first time. Porsche has decades of experience in rally and raid-style off-road racing. Think back to 1968 and Porsche pressed the 911 into rally service with Vic Elford winning the Monte Carlo Rally that year. Not to mention the company’s several Dakar and East Africa Safari Rally successes.

Safari silliness has taken the Porsche world by storm, kicked off by friend of the site Leh Keen’s Safari cars, plus dozens of others built by the likes of Kelly Moss Motorsports, the two LuftAutos, and more. And don’t forget that Gemballa and Ruf have both teased extreme modern off-roading 911s. Would it really be that much of a surprise that Porsche offered a safari 992? I don’t think it would. The only thing that surprises me is that Porsche didn’t do this five years ago.

The post What Is This High-Riding Porsche 911 Prototype Spied In Testing? appeared first on FLATSIXES.