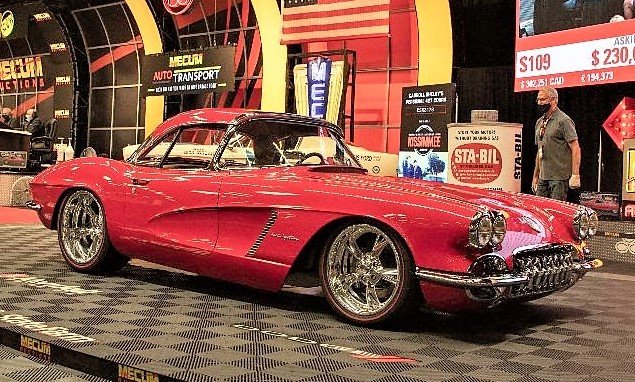 Led by the sale of a 2006 Ford GT and a 1962 Chevrolet Corvette resto-mod, Mecum’s live auction in Dallas achieved total sales results of $23.8 million and an 82 percent sell-through rate with 612 collector cars sold.

Mecum touted in a news release its formula for conducting safe in-person auctions that adhere to pandemic guidelines while reaching strong sales results.

“Mecum remains dedicated to hosting safe and successful live auctions,” the release says. “These sales are made possible through a team of dedicated staff, joint strategic planning with venue partners, and the extensive and enhanced safety procedures deployed to keep auction-goers comfortable and safe while continuing to provide them the necessary platform to conduct business on a regular and on-going basis.

“This tried-and-true formula for success was on full display in Dallas and will take center stage once again next weekend in Indianapolis for Mecum’s next live auction event.”

The diverse group of 10 highest sellers at the Dallas auction were:

Mecum’s next live auction, the Indy Fall Special, takes place October 29-31 at the Indiana State Fairgrounds in Indianapolis with about 1,000 collector vehicles expected.