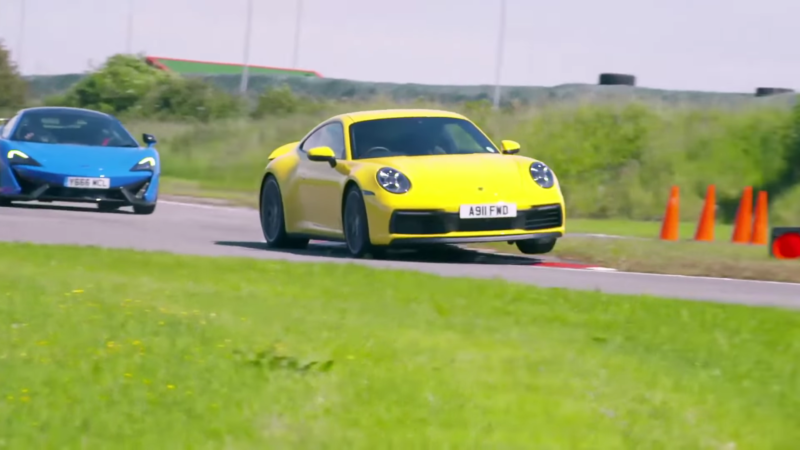 A battle between BTCC’s bad boy Jason Plato and ex-F1 driver Karun Chandhok again solidifies the simple truth that a garden-variety Porsche can punch well above its weight. Half the price, heavier, less powerful, and arguably less track-oriented, and yet the Porsche 992 Carrera 4S still performs startlingly well against a McLaren 570S around Castle Combe in this shootout.

Perhaps it shouldn’t come as a surprise that the McLaren is the quicker of the two, but the difference at the finish line is minute. How does this underdog manage so well in a hotly contested duel with a statistically superior vehicle?

The ability to gently ride the curbs which the McLaren clamber is one of the Porsche’s best assets.

The Porsche makes excellent use of its 450 horsepower around a damp and fairly technical circuit for several reasons: its four driven wheels, four steered wheels, greater grunt, and supple suspension setup. The last element allows it to clobber the curbs without punishment, which make it that much better at navigating the several slow-speed switchbacks here. Though the direction change in the McLaren is better, it’s the complete low-speed package (damping, direction change, and traction) which determines the overall speed through the tight complexes.

By comparison, the McLaren is a more highly-strung thing. It rides much lower to stay pointy, it’s not quite as confidence inspiring in the slippery sections, and it’s a little too good at turning the driven tires into plumes of blue-grey smoke. Just watch the way Jason wrestles with the slithering tail out of every type of corner. Sure—it’s definitely spectacular, but it’s clear that the 570S’ 285-rear section tires struggle to administer this level of power to the pavement.

Though the McLaren has far more peak power, the Porsche makes an additional 30 lb-ft of torque overall—which is offered at just 2,300 rpm. This adds to its low-speed advantage that helps it along most of Castle Combe, a track with only a few truly quick corners. Even in those several >70mph bends, the balance of the 911 gives it a ~5-mph advantage to help it stay in the fight.

However, horsepower has a way of trumping a bevy of great attributes if the conditions are right. With a straight long enough to stretch is sinewy legs, the McLaren powers past effortlessly. Once ahead, its demanding behavior in slower bends keeps it from pulling away and both aces cross the finish line smiling, jittery, and visibly satisfied they could extract such performance from these two very different machines.