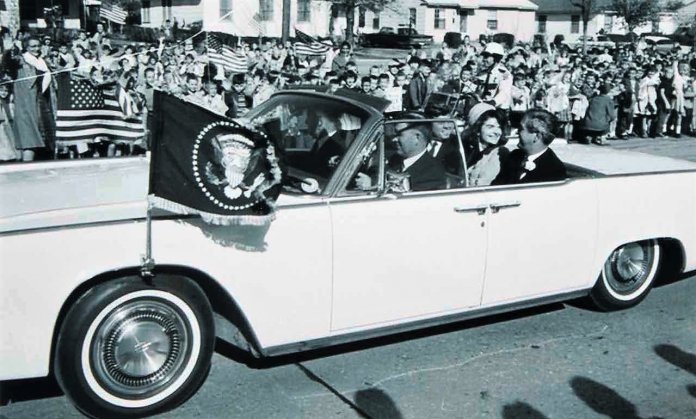 A white 1963 Lincoln Continental convertible that was the last automobile to safely carry President John F. Kennedy before he was assassinated sold for $375,075 during the Bonhams American Presidential Experience Auction held October 14 in New York.

The Lincoln convertible, which on the fateful morning of November 22 1963, took Kennedy and the First Lady to the Carswell Air Force Base near Fort Worth for the flight to Dallas, was the top-selling piece of presidential memorabilia presented at the auction.

The second-highest sale was that of a personal Kennedy item, his government-issued Air Force One leather bomber jacket that the President had given to his friend and advisor David Powers. The jacket, with the presidential seal affixed over the right breast, sold for $250,075.

Several other large pieces of Kennedy memorabilia were no sales at the auction, including a 1960 Lincoln Continental Mark V Executive Limousine used by President Kennedy for personal trips in Washington, DC.; the full-size display replica of the Boeing 707 used as Air Force One; and the full-size replica of the Oval Office in the White House, complete with furniture and decoration.

The Presidential Experience Auction, which included a number of other historic presidential items from various administrations, was held with a live auctioneer on the rostrum at the Bonhams’ showroom on Madison Avenue and was live streamed on the Bonhams website, with bids accepted online, by phone or by absentee bidding.

The two presidential Lincolns were the only automobiles at the auction, which also offered documents, letters, photos and other significant items linked with a number of presidents, such as a lock of George Washington’s hair and a stone fragment from the White House.

Two auction lots placed third in the bidding, each selling for $12,575: a framed display piece memorializing Kennedy’s creation of the Peace Corp., including the pen used in the signing, and an 18th Century china set used during the years that Thomas Jefferson occupied the White House.

For more results from the auction, visit the Bonhams website.