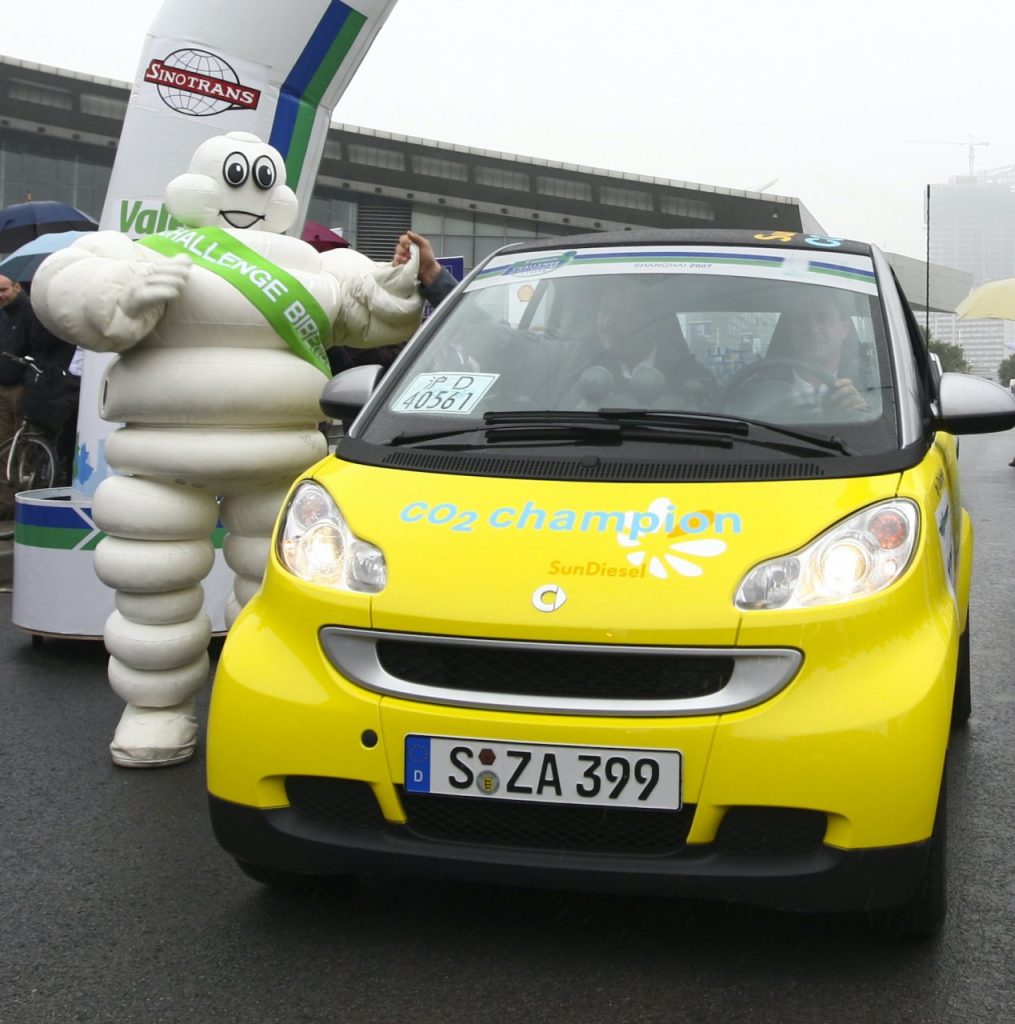 When your product looks pretty much exactly like its competitors, you have to get creative with your marketing plan. After all, how do you let consumers know your product is better than the others when they all appear to be identical?

And so welcome to the world of the Michelin Man, the Goodyear Blimp, the Pirelli calendar, and the world’s largest tire, the later serving car-building Detroit much like the “Welcome to Fabulous Las Vegas” sign does for place-your-bet Las Vegas.

We begin our story in Lyon, France, at the Universal and Colonial Exhibition, a global trade show, in 1894. To attract people to their display, brothers Edouard and Andre Michelin arranged their white-wrapped tires into stacks that resembled children’s snowmen.

“Give it some arms and legs, and it would look like a man,” Edouard said to Andre.

Andre’s response was not recorded, but four years later, that stack of tires sprouted not only arms and legs but hands and feet, a head and a name, and Bibendum, the Michelin Man, was introduced as both the guardian against road hazards, who sacrificed his own body to protect vehicles and their passengers, and as a smiling travel and tour guide for those venturing out in their newfangled motorcars.

Although he appeared to have been all but retired after World War II, and was not much involved in promoting Michelin’s breakthrough radial tires, Bibendum made a comeback after American astronauts landed on the moon in the summer of 1969. Perhaps the tire company had little choice after people around the world remarked how the men in space suits bounding around the lunar surface reminded them of the Michelin Man.

Bibendum was back, and soon was among the first championing the cause of sustainable mobility on a global stage, and in a poll of branding experts conducted by a Canadian business magazine, he was rated the No. 1 best corporate emblem in the world, ahead of the likes of the CBS eye, the Playboy bunny, the Nike swoosh and even the Red Cross’s red cross.

While the Michelin Man may be No. 1 with advertising experts, many sports fans would tell you their favorite tire-touting object is the Goodyear Blimp. Goodyear entered into a joint venture with Zeppelin in 1923 and in 1925 produced Pilgrim, the first blimp to use helium instead of flammable hydrogen as its lighter-than-air gas filler.

(Note: While both are airships, lighter-than-air aircraft with propulsion and steering systems, a Zeppelin, named for its German inventor, Count Ferdinand von Zeppelin, has a rigid internal structure and can be larger and faster in flight than a blimp, which takes its shape from the gas inside filling its airtight envelope. The term “blimp” was coined around 1915, reportedly inspired by the sound made when such an aircraft was thumped by a person’s hand.)

Not content merely with the tire company’s name on its blimps, in 1930 the Goodyear Blimp Defender became the first airship carrying 10 aluminum-framed panels, the Neon-O-Gram, that proclaimed “Goodyear” or other messages across the night sky.

The company also produced airships for the U.S. Navy and to provide surveillance of the American coastlines during World War II. After the war, Goodyear blimps were used to carry television cameras, the Enterprise V flying over the Tournament of Roses Parade in Pasadena, California, in 1955. It wasn’t long before Goodyear blimps, operating from bases in Ohio, Florida, Texas and California, were as much a part of American sports events as were tailgating and cheerleaders.

During the 1964 New York World’s Fair, more than 2 million people — including Jacqueline Kennedy, the Shah of Iran and Telly Savalas — rode a Ferris wheel that looked like a gigantic, more-than-80-foot-tall U.S. Royal tire. The wheel had 26 gondolas, each with room for four people.

The fair ended, the device was taken apart, the Ferris wheel went to New Jersey while the tire shell was shipped to Detroit, where the steel skeleton and tire (made of fiberglass rather than rubber) were reassembled at the Uniroyal office adjacent to I-94 between Metro Airport and downtown Detroit.

After Michelin acquired Uniroyal Goodrich in 1990, the gigantic landmark was restored with a new hubcap and neon lighting of the Uniroyal lettering. From 1998 to 2003, an 11-foot “nail” emerged from the tread to promote Uniroyal’s new puncture-resistant tire line. Another restoration took place with new steel beams inside and replacement of the neon lighting. The shell also was redone to resemble a modern radial rather than a bias-ply tire.

How large is that tire? Mac’sMotorCityGarage.com reports that were a car built to the same scale, it would be 200 feet tall and stretch 720 feet (2½ football fields) in length.

While Michelin has its man, Goodyear its blimp and Uniroyal its big tire, Pirelli has its calendar, aka “The Cal,” and that phrase is trademarked by the Italian tire company, which proclaims The Cal as “The most beautiful women, showcased by the greatest photographers. It is, simply, the world’s most famous calendar.”

Anyone could purchase a copy of Sports Illustrated’s bathing suit issue, but Pirelli produces only 20,000 copies of its calendar and sends them to a selected audience, though exhibitions of the artwork has spread to galleries and books and to global news coverage (or uncoverage as the case might be with specific images).

The Cal was launched in 1964, was discontinued for a decade during the oil crisis period, and has evolved with the times, The New York Times reporting that the 2016 Pirelli Calendar, photographed by Annie Leibovitz, signaled a cultural shift.

“We call it the rise of the shero,” the newspaper quoted advertising executive Jennifer Zimmerman, who added that with such a change in emphasis, “the greatest offender had become the greatest bandwagoneer.”

It may not have a blimp, a Ferris wheel or a calendar, but Firestone supplied the tires that carried Ray Harroun to victory in the inaugural Indianapolis 500-mile race and has been the exclusive tire used in Indy car racing since 2000. But even before it had such a deal, its tires had carried the winning car to Victory Lane in more than half of the Indy 500s.

Firestone was acquired by Bridgestone in the late 1980s. But in the 1960s and ‘70s, Firestone’s television advertising featured a jingle that became part of American pop culture:

“Wherever wheels are rolling.

No matter what the load.

The name that’s known is Firestone

Where the rubber meets the road.”

While their tires may look alike, and all of them providing the only contact between vehicle and roadway, these companies and their competitors have ventured far and wide (and high) in a variety of ways to promote their products with the tire-buying public.

The post Tires might look the same, but companies advertise them in a variety of ways appeared first on ClassicCars.com Journal.