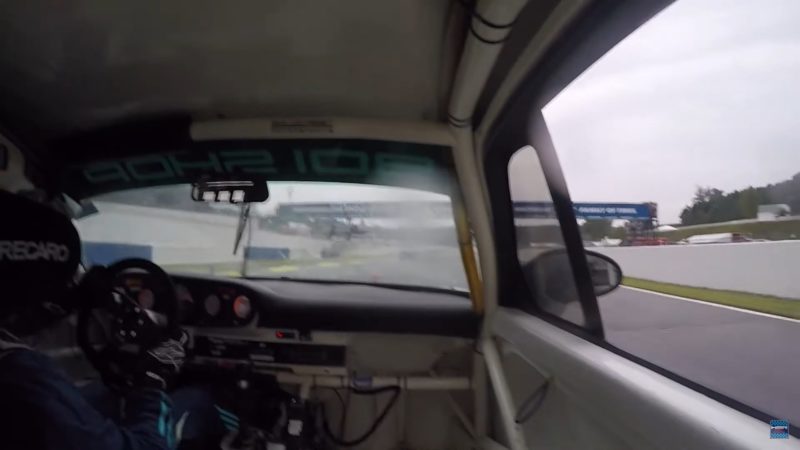 I’ve been for a few laps at Road Atlanta when it was absolutely chucking it down with rain. It was during the U.S. market launch of the 991 GT3 RS and 981 GT4, and I was chasing one Hurley Haywood around the lap. Down the back straight, which isn’t particularly straight, I lost Hurley in the water spray kicked up by the 991 Turbo he was driving ahead of me. Is there a reason I mention that here other than to say that rain racing scares me half to death, and to do a bit of bragging that I’ve had track instruction from one of the greatest Porsche racers of all time? No, of course not.

In any case, rain racing scares me half to death, and there’s almost no track on earth where heavy rainfall is as treacherous as Road Atlanta. That long sweeping downhill right hander that leads onto the main straight is extremely fast, and in the wet it is just begging you to get it wrong. Without so much as a driver aid in this vintage racing 911, driver Eric Lux is putting on an incredible display of car control in truly appalling conditions. This level of wet would be white knuckle in a street car at modest speeds. I’m not sure how they do it, if I’m honest.

It’s quite obvious from the green flag that the 911 ahead of Lux has a good bit more horsepower, but Lux makes up for that in talent and perhaps a bit of bravado. Lux, under braking into the 10a and 10b complex, is difficult to beat with this combination of car and tire. There were a few points around the lap that Lux made up all of the ground lost on the straights. It’s a good simple fight between talent and car, and it’s definitely worth four minutes of your time. Crank it up and try to learn a thing or two.

The post Hop Onboard This Spirited 911 As It’s Flung Around Road Atlanta In The Rain appeared first on FLATSIXES.