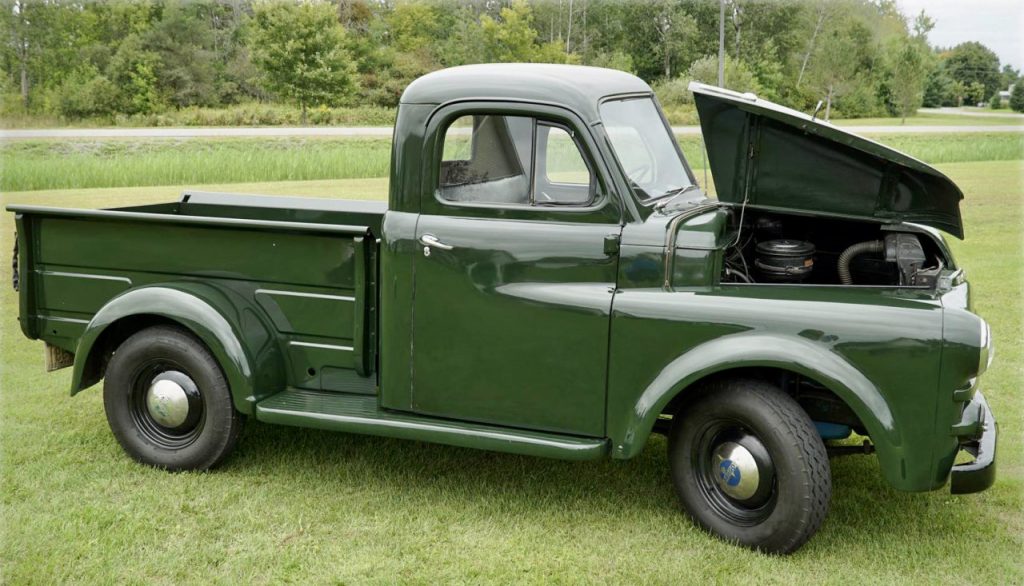 The Pick of the Day is a pickup truck that was abandoned in a farm field in northern Alberta, Canada, for decades until a member of the family decided to rescue and restore it.

“An abandoned farm truck found a new home, still in the family, but nowhere near the farm,” reports the truck’s owner, who is advertising it for sale on ClassicCars.com. “It, like its owner, is retired from laboring and enjoying the good life!”

The truck is a 1951 Chrysler of Canada Fargo half-ton pickup that the seller says has won “best truck in show” awards at local shows since it was “painstakingly restored as close as possible to the original.”

“This unique workhorse truck came from a family farm in Northern Alberta and was last registered in 1978. From that time until I restored the truck, it sat on the farm in a field,” the seller says.

“We suspect it was originally employed at the military base in Beaverlodge Alberta, Canada, and was sold to a local farmer before the family owned it. I recovered it in 2000 and my photo journal tells the story of its restoration until it was registered and road worthy in 2010.

“Mostly shown at country fairs and cruise nights, I have always allowed access to the truck for pictures and have never imposed a ‘no touch policy.’ It is, after all, a truck.

“My greatest thrill is to see folks who remember their childhood on the farm, and who, seeing my truck, get in behind the wheel and reminisce, some with tears in their eyes.”

Fargo trucks predate their Chrysler badging. The Fargo Motor Car Company was established in Chicago in 1913 by three members of the Kral family, and reportedly produced trucks until 1922. Chrysler acquired the rights to the Fargo name in 1928 and entered the commercial truck market. It also was in 1928 that Chrysler bought Dodge and soon began rebadging Dodge trucks as Fargos to sell at Chrysler-Plymouth dealerships.

Separate production of Dodge and Fargo trucks ended during the Depression, but Chrysler continued to use the Fargo badge on Dodge trucks it was selling in foreign markets.

Although not specified in the advertisement, other than to note that the original engine is running, Dodge’s half-ton pickups were equipped with a 218cid inline-6 flathead engine rated at 95 horsepower and 172 pound-feet of torque. The standard transmission was a 3-speed “sliding gear” unit, though trucks with the power-takeoff option got 4-speed gearboxes.

The truck is located in Carlsbad, Ontario, and is being offered for $22,000. To view this listing on ClassicCars.com, see Pick of the Day.