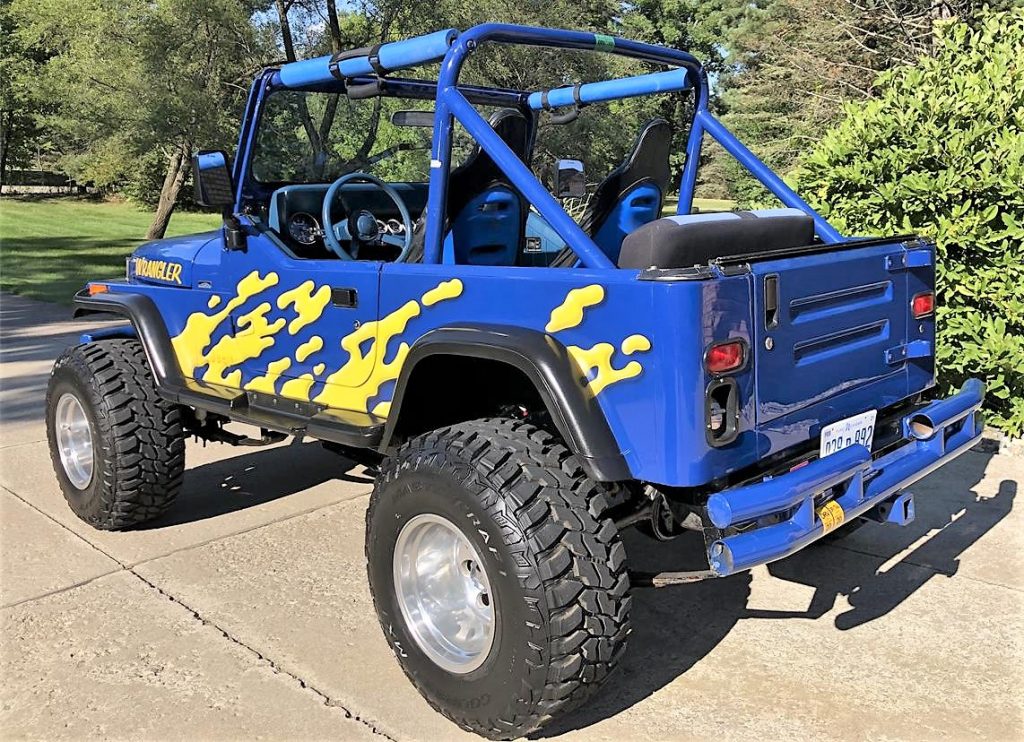 “It’s a Jeep thing.  You wouldn’t understand.” Anyone who’s seen that decal on a Wrangler or a Cherokee has probably wondered:  What is it about Jeeps?

Among automotive communities, there seems to be a more tight-knit group of Jeep fanatics than for most other makes.  Perhaps at one point in everyone’s lifetime, there should be a Jeep ownership story.  And perhaps someone’s Jeep ownership story will start as a result of coming upon a certain eye-catching listing for a Wrangler on ClassicCars.com.

The Pick of the Day is a 1988 Jeep Wrangler Laredo custom with both cosmetic and mechanical enhancements that set it apart from run-of-the-mill Wranglers.  This would make it one of the YJ Wranglers that were sold between 1986 and 1996; the model was originally developed by American Motors, but the Jeep brand had come under ownership of Chrysler by the time the YJ first went on sale for the 1987 model year.

The Jeep is listed for sale by a private seller in Linden, Michigan, who describes some of the vehicle’s noteworthy attributes.  The story starts with the exterior, where beefy tube-style bumpers are body-colored in a vivid blue shade and contrasting yellow “splash” decals are featured along the sides.

Showing 97,000 miles on the chassis, this Jeep has the punch to back up its curb appeal, thanks to a 396-cubic-inch big-block V8 mated to a turbo 400 automatic transmission.  Performance gearing puts that power to the pavement or, if so desired, to the dirt.  Though with an undercarriage and body this clean, the next owner of this Wrangler might decide to preserve its looks rather than risk scuffing it on the technical trails of Moab.

Two-tone black-and-blue bucket seats look suited to a racecar, and aftermarket gauges supply information on that performance drivetrain.  The seller states that this Jeep “has to be seen to be appreciated,” and it does appear to have been well taken care of, especially since many of these Jeeps have been driven hard, then put out to pasture.  Accompanying the sale is a full soft top in like-new shape, the seller says.

This Wrangler might be just the learning tool that helps someone understand what that “Jeep Thing” is all about.  The seller is asking $16,900 for the clean custom Jeep.

The post Pick of the Day: 1988 Jeep Wrangler custom ready for trail or show appeared first on ClassicCars.com Journal.