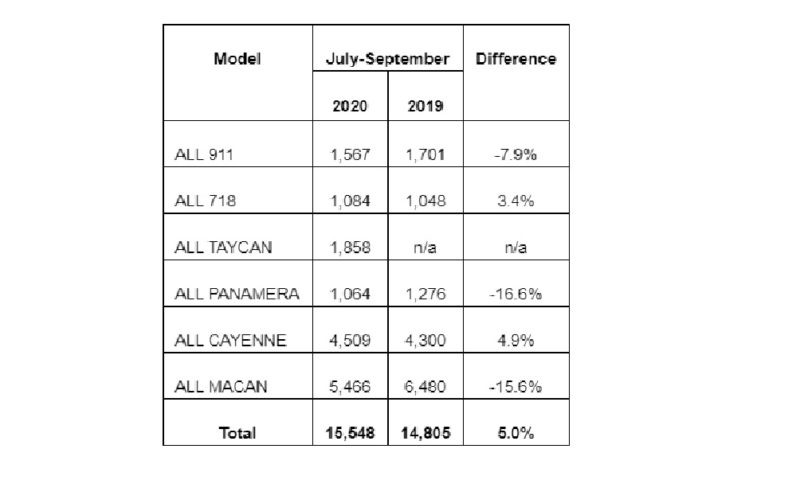 Things were looking dire for Porsche in the first half of 2020 with fewer cars sold than the same period in 2019, thanks to the global coronavirus pandemic that shut everything down for several months. In fact, things aren’t looking a whole lot hotter with Q3 sales only up 5% over the same period in 2020, despite a new 911 to draw potential customers into showrooms, and the full strength of Taycan deliveries finally hitting U.S. shores. You can see here in the chart above that every single model in the Porsche lineup is down considerably with the exception of the 718 which stayed flat, and the Cayenne which posted a couple hundred more examples sold than last year. Without the Taycan, Porsche would have sold at least 1000 fewer units in Q3 2020 compared to Q3 2019. Thank goodness for Electric, then.

“The third quarter remained challenging for many people, so I am grateful to our customers for their enthusiasm and to our dealers and their employees for the energy they continue to bring to Porsche,” said Joe Lawrence, Executive Vice President and Chief Operating Officer of PCNA. “We’ve never had such an exciting lineup in U.S. showrooms – with demand for the new all-electric Taycan growing to the point that it was our third best-selling model line this quarter, just behind the Macan and Cayenne. Our thrilling cars and the legendary customer experience provided by Porsche dealers are contributing to an ongoing recovery.”

Obviously the biggest unit sales loss in the bunch has to be the Macan, which still has the distinction of Porsche’s highest selling model, despite selling over 1000 fewer units this year as compared to the same period in the previous year. With such huge Macan sales, PCNA could afford to lose a few and supplement the compact ute’s loss with almost 2000 examples of the six-figure electric sedan. I am definitely surprised to see 992 sales already dipping, however, as the model was just recently introduced. Perhaps production delays are still beleaguering the PCNA delivery schedule.

Interestingly, Porsche’s CPO program continues along at full steam with 7,661 vehicles from July through September, up 26.4 percent year-over-year. This is good news for dealers, as the used vehicle sales traditionally have a much higher profit margin for them. Keep buying used Porsches, I guess.