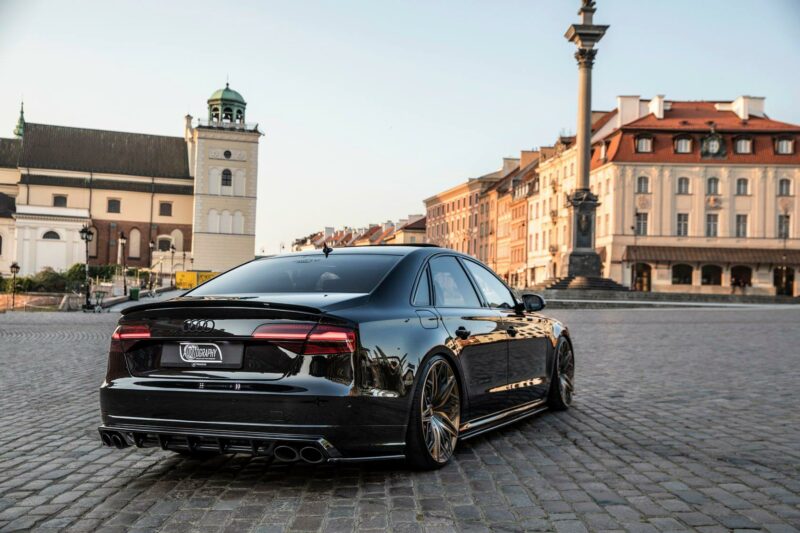 Who doesn’t love a good Audi S8? Each and every generation of S8 has been awesome; big, powerful, luxurious and good looking. One of the other interesting aspects of more modern S8s has been their tunability. Thanks twin-turbocharged V8 engines, you can tuned an S8 to have stratospheric levels of power. As evidenced by this monster D4-generation S8 in this new video from Auditography.

Under the hood lies its original 4.0 liter twin-turbocharged V8 but it’s been tuned to make a whopping 700 horsepower and 737 lb-ft (1,000 Nm) of torque. So it can spin all four wheels during a launch, which is shown at the beginning of this video. We don’t know what sort of exhaust it has but it sounds great; loud, angry and raspy.

According to the owner, this monster Audi S8 can hit 60 mph in about three seconds, which is shockingly fast for such a big, heavy car.

It looks great, too. Thanks to its Maxton design aero body kit, it looks lower, meaner and much sportier. The 22-inch Inventa forged wheels don’t hurt its look either. Plus, how great is a black car with gold wheels?

This D4 Audi S8 sits on its as-standard air suspension but it also has a KW DLC, which is an electronic module for stock air suspensions. The idea is that the KW electronics can modulate the height and feel of the suspension, making the car sit lower and handle better. It’s actually quite clever for cars that already have air suspension. Rather than fitting a new system, just essentially let KW — one of the best suspension makers in the business — reprogram it.

As always from Auditography, the cinematography in this video is excellent. So check this video out and see just how cool the D4 Audi S8 can be, especially when it’s done as well as this one is.