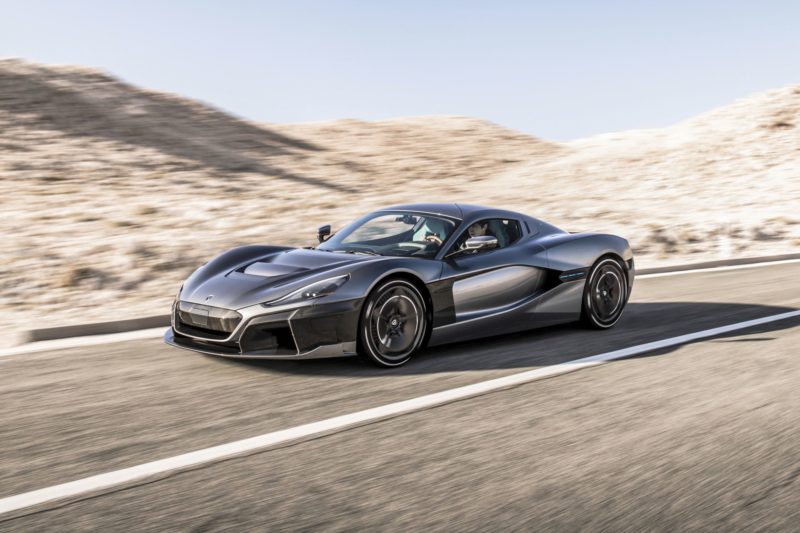 Croatian electric phenom Rimac Automobili has only been on the scene for a decade, but it’s already making a splash. With electric performance quite obviously marked as the future of Porsche, the German automaker already owns a 15.5% stake in Rimac. The deal includes Porsche providing Rimac with manufacturing and engineering skills when needed, while Rimac shares battery and electric motor tech with Porsche. Aside from the two models it has produced—the Concept 1 and the C Two (pictured)—Rimac also manufactures motors, batteries, controllers, and even complete cars to companies like Aston Martin, Koenigsegg, Jaguar, Seat, and Pininfarina. It’s pretty obvious why Porsche wants a piece of this delightful electric pie, and it’s not for Rimac’s sister company Greyp Bikes, which makes e-bikes and scooters.

Currently Rimac is also partially owned by Chinese battery company Camel Group (14%), Hyundai (11%), and Kia (2.7%). Porsche isn’t satisfied with its small percentage, which it increased in September of 2019. Porsche wants a larger piece of the pie. Porsche wants 49% of the company. Not a controlling majority, but the largest segment. And it’s willing to offload portions of parent company Volkswagen A.G.’s holdings to get it. Namely, Porsche wants VW to give Bugatti to Rimac in exchange for Porsche getting 49% of Rimac. Yeah, it’s convoluted, but it looks like it might be in the works.

Basically, VW revived the Bugatti brand because company boss Ferdinand Piëch wanted to show the world it had the fastest cars in the world. And it did. After billions invested, the Bugatti Veyron 16.4 ultimately went 269.806 miles per hour, setting a new production car closed course record. The engineering is second to none, but the price tag will make your eyes water. Bugatti currently produces the Chiron and the Divo, both of which are very fast, very heavy, and very expensive. The brand loses Volkswagen money every year, and apparently the company is tired of carrying this albatross around its neck, looking to divest itself of brands under its umbrella that don’t help it develop electric and autonomous tech, namely Bugatti, Lamborghini, Seat, Bentley, and Ducati.

The post Porsche Is Working A Deal To Trade Bugatti For Part Of Electric Hypercar Maker Rimac appeared first on FLATSIXES.