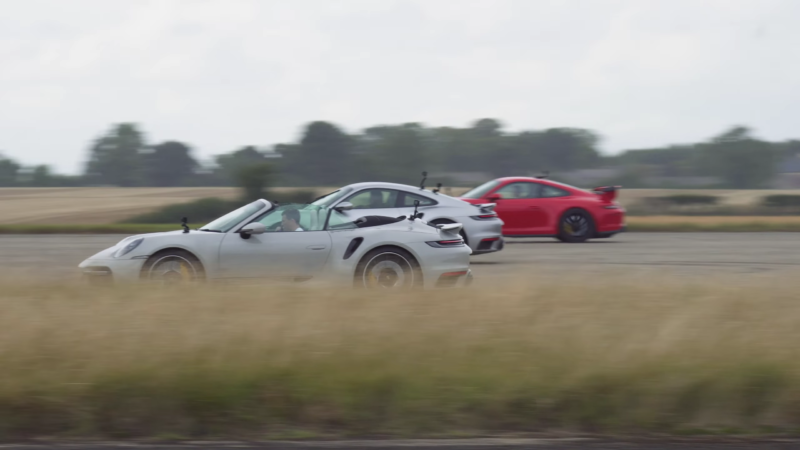 For going quickly with minimal effort, there aren’t many vehicles better than the latest 911 Turbo. Its massive torque is made manageable with enviable traction, its slippery shape helps it all the way to 205 miles per hour, its power delivery is predictable, and the gearing—among other things—makes it faster than the Taycan Turbo S.

With all these assets, it’s not a surprise it’s a drag king, but perhaps the way its performance hardly worsens when the road is slick is surprising. In this 180-mph drag race, we witness how the elements hardly faze the Turbo S Coupe and the Turbo S Cabriolet. We also see just how quick the track-oriented GT3 is in a straight line. If there’s one point this carwow clip gets across, it’s just how capable the faster Carreras are in any situation. A damp track and a standing start are the perfect conditions to showcase the Turbo S’ strengths.

The reasons the Turbos excel on straights is simply because the numbers are much bigger. Though the coupe weighs in at  3,650 pounds and the convertible at  3,850—both a lot porkier than the svelte, 3,153-lb GT3—they have the advantages of a wider powerband and real torque. To balance the extra heft, the Turbos have another 127 horsepower and 251 lb-ft of torque to play with, with the peak torque figure arriving very low in the rev range.

That’s a large part of why it’s so effective in leaving the line in a hurry. With a top or not, the Turbo S’ 590 lb-ft is available between 2,500 and 4,500 rpm. Combine that frightening grunt with the simplified launches of a four-wheel drive vehicle, and it’s easy to see why these two Turbos are very effective from a dig.

While the Turbos leave the line without fuss, the rear-wheel drive GT3  briefly suffers some wheelspin. That speed off the line is effortlessly magnified over the length of the quarter-mile race, which both variants of the Turbo S complete in a staggering 10.4 seconds—only 0.3 seconds off the best the Turbo S Coupe could manage on a bone-dry track. For minimizing the limitations of a damp track, is there a better car? Without the wind deflector up, the Cabriolet’s cabin gets a little blustery at 150 miles per hour.

As they continue on to higher speeds, the smoother shape of the Coupe pays dividends. After 150 miles per hour, not only does it begin to walk away like it’s packing another 150 horsepower, but it looks to make life more enjoyable. At those speeds, a roof is a wonderful thing—especially when the heavens have opened.