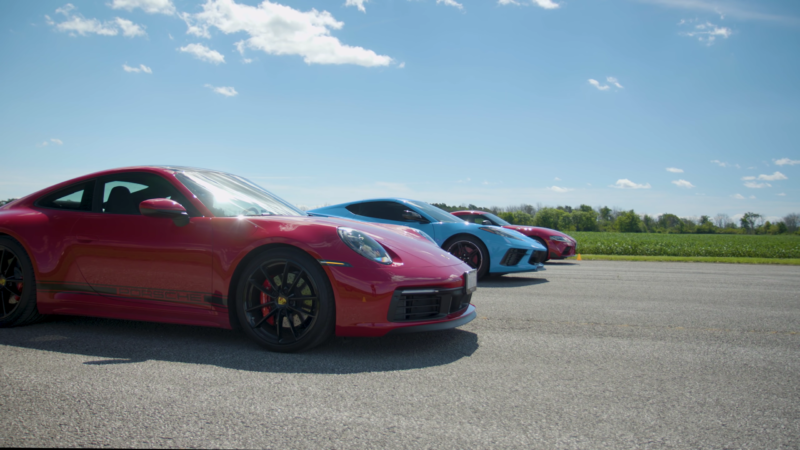 This is a lineup that should draw gearheads of all stripes. The Porsche Carrera and the Chevrolet Corvette will forever be compared with one another, and one new entry into the fray joins them with impressive numbers and a much lower price tag. This new Supra has weight and horsepower comparable to the Porsche’s, but as we see, the two aren’t really sparring partners.

With the layout least likely to produce a decent launch, the Supra is the attractive non-contender in this race. It’s a stunner, without a doubt, but the two which have the spotlight are long-time rivals with strengths of their own.

The Carrera S has turbochargers, more top-end, and the best layout for leaving the line in a hurry. It also builds boost at a standstill, so its 90-foot time is going to always be the best, provided the tires are the same. The C8 Corvette should be able to compete much better than its predecessors could in this department now with more weight over the driven wheels, and it has the displacement advantage over the Porsche—something which does make a difference depending on the speeds of the drag race. 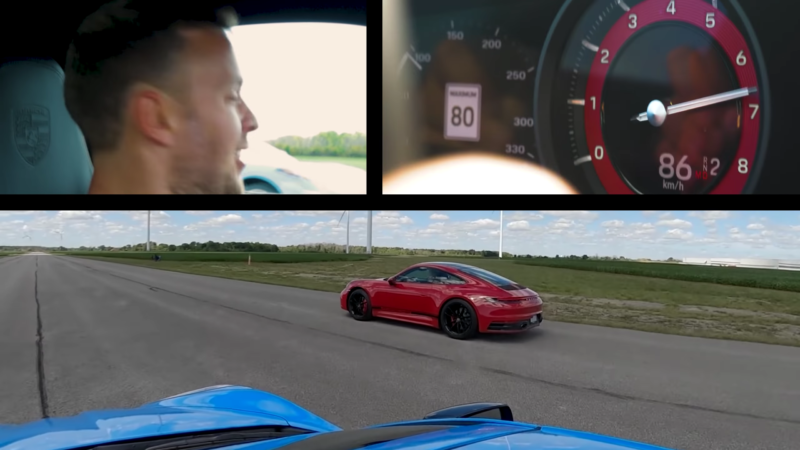 It’s not so much the launch off the line—it’s the charge from sixty miles per hour onwards which truly separates the two.

In this comparison, it’s the crimson Carrera which is the undoubted best on the drag strip, or in this case, airfield. Whether from a dig or a roll, it’s the one which wins out. True, the roll performance isn’t quite as strong as its departure from a standstill, but it just doesn’t have the immediate torque of the Corvette’s 6.2-liter V8.

Though the slightly heavier ‘Vette makes more torque—470 lb-ft of torque at 5,150 rpm—it’s the Carrera which makes its peak figure from zip. Well, nearly. The 3.0-liter turbomotor generates 390 lb-ft of torque at 2,300 rpm, though Motor Trend recently inspected the output and realized it made a bit more. The critical takeaway is that its the entire area under the curve which makes the greatest difference here. Though this Corvette puts up a fight from sixty, there’s no way it can match the Carrera’s relentless shove.

In the following race around their narrow road course, it’s the Corvette which takes the win. Perhaps that may come as a surprise to some, but seeing as this course is quite tight and the Corvette is arguably the better balanced vehicle, and there’s no denying the impact the Corvette’s track-spec alignment (three degrees of negative camber in front) has on rotation around this car.

The Porsche’s Goodyear Eagle F1 is a decent tire, but doesn’t provide the outright grip of the Michelin Pilot Sport All Season 4 underneath the Corvette. Thomas, the man setting the lap times, admits to the Porsche having a little less mid-corner grip, but it compensate with the amount having far more information coming through the steering wheel.

The post How Does A Porsche 911 Carrera S Hold Up In A Drag Race Against A Chevy Corvette and a Toyota Supra? appeared first on FLATSIXES.