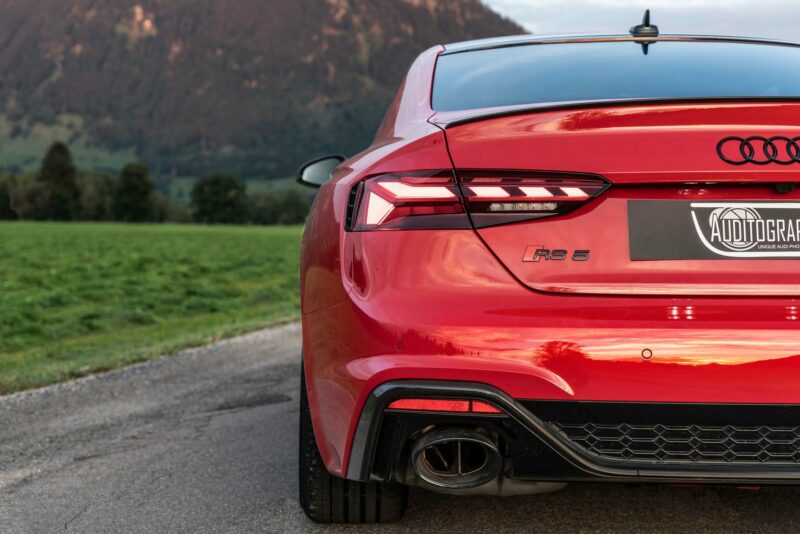 In terms of driving dynamics, one could say that the current-generation Audi RS5 is lacking. On a twisty road, the RS5 might be one of the quickest cars on the road, point to point, due to its immense grip, explosive power and impressive capability. However, it won’t be the most satisfying to drive, as it’s just a bit too numb. Hot damn, does it look good, though.

As always, Auditography brings the style in this latest video featuring a Tango Red Audi RS5 Coupe with black wheels and gloss black accents. Tango Red is one of my personal favorite current Audi colors and it’s one of the best reds in the business. It’s also perfectly suited to the RS5, as it’s typically a relatively sedate looking car, so the vibrant red paintwork really helps it pop.

On the inside, the newly facelifted RS5 gets the latest MMI infotainment screen, that simply replaces the old one. So it’s still tacked onto the top of the dashboard, slightly out of reach for a touchscreen, but it’s a technologically superior system. The rest of the interior is mostly the same, though. No bad thing, as it’s a nice cabin, but it’s just not any different than it was before.

It is fast, though. Packing a 2.9 liter twin-turbocharged V6, the Audi RS5 Coupe makes 444 horsepower and 443 lb-ft of torque. That’s not as much power as cars like the Mercedes-AMG C63 or Alfa Romeo Giulia Quadrifoglio but the RS5 ends up being every bit as fast as those cars in a straight line and likely faster through twisty roads. It’s nigh unflappable, the RS5.

This video lets us see its acceleration and hear its engine, which is good but its engine could use a bit more excitement. It’s just not a brilliant sounding engine. Effective but lacks drama.

Still, if you’re in the mood for some Audi RS5 in your life, check this video out because it really shows off one of Audi’s coolest looking coupes.