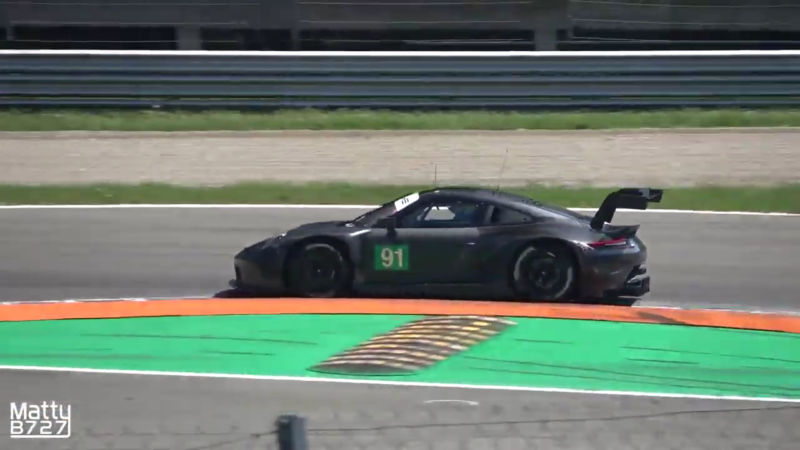 In all the sports car races I’ve attended, it’s usually the shrill scream of the RSR which forces me to cork my ears the most. The note itself is blaring, but its almost subdued compared to the deafening pops of upshifting which punctuate it. It’s a high price we pay being racing fans; in my book, a little tinnitus and an almost constant sunburn say more about dedication than any emblazoned hat could.

Though some of us are willing to live with a regular ringing in our ears, noise restraints at tracks across the European continent are still getting stricter and stricter. To ensure their customer racers are able to race regularly, Porsche has started playing with exhaust routing to produce a slightly softer note. This latest iteration of a the GTE-homologated 911 RSR-19 has its exhaust pipes exiting from the center-rear instead of in front of the rear wheel arches.

Squeezing the exhaust between the diffuser and the motor was another challenge.

“All regulations from a racetrack point of view are getting more severe,” Pascal Zurlinden, Porsche’s head of factory motorsport, told Sportscar365.

“As we plan to sell our ten customer cars, we want to make sure that our customers can run their cars at as many race tracks as possible during normal testing, without special authorizations.”

The main reason for this relocation to the rear is to provide enough space for a hefty set of mufflers. Unfortunately, this addition increases the weight of the vehicle, though BoP rules will allow this vehicle to use a smaller air inlet to compensate for its weight gain, albeit with reduced control over the way the ballast is positioned. In Porsche’s eyes, this compromise is worth it if their customers will have an easier time testing.

This note might still be excessively loud to some ears, but compare it to the old snarl of the side-exit-exhaust-wearing sibling. It is much, much more civil, so those building homes near racetracks should have an easier time relaxing.